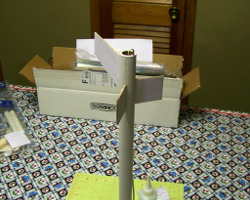 Got a little more done tonight. Attached Kevlar to the engine mount with CA, per my usual procedure. I know replaceable Kevlar is the "in" thing now, but I couldn't work out a good way to do it with this rocket, and as it's going to be an infrequent flier I decided to stick to the tried-and-true method.

When the CA was dry I mixed up some epoxy and installed the engine mount; half an hour later, I marked the tube and drew the lines. The wrap printed a hair small, so I marked the tube both ways to get an even distribution. Radial symmetry is not critical with this rocket, i.e. it will never show.

Switched to yellow glue to attach the lower fin and pylons, using the usual double glue method. I worked on a couple of other rockets tonight, and had trouble getting a good grab on all of them, but persistence won out. The Atlantis airframe is now busily drying in the other room as I type this.

If there's one thing I stink at in the rocket-building arena, it's balsa butt joints. So last night I set out to put the decorative pieces of balsa together... five pieces of balsa connected by butt joints. I quickly determined I was not going to be able to get them together without significant loss of sanity by following the directions.

So I papered them. I glued each piece down to a sheet of paper, diagonally, cut around it, then turned it over and glued it to another sheet of paper and trimmed that as well. To avoid warping, I placed the assembled deck piece in a folded sheet of waxed paper and pressed it under a copy of the Handbook of Model Rocketry and a pile of cast iron cookware belonging to my wife.

While I was at it, I also papered the fins (the single swept fin and the two pylons). I didn't paper the other partial circle deck pieces, as I'll have to do a bunch of filling on them anyway to match them to the dowels they get glued to.

The deck assembly didn't fit the paper perfectly; a little bit of the narrow end stuck out, necessitating a patch at the end. I only patched the upper side, since the lower side won't show, though I may yet change my mind and patch it as well. 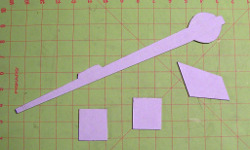 Unfortunately, after I removed the dry pieces from the waxed paper, they dried a bit more, giving the long deck piece a longitudinal twist. It's not really visible in the picture, but it's definitely visible in person. A few years ago when I built my Ultimatum, I had warping problems with its fins, which I had papered for strength. I thought I'd have to make a whole new set, but before I went to that extreme I put the fins under a stack of books for a few weeks, and they came out fine. So that's what I did with the Atlantis deck piece... it's under a pile of books right now. I'll have to check it every so often to see if the warp has come out of it, of course, but I have every confidence it will work out.

Back in December 2012 I posted the following on YORF:

Lemme tell you a story.

In early October, my best friend died, claimed by cancer a few days before his 47th birthday, and a few days after mine. He wasn't a rocketeer... in fact, owing to his health issues and my late return to the hobby, he never got to attend a launch. But he knew I was into rocketry. You can't walk in to my office and not know I'm into rocketry.

His widow came by the other day and handed my wife a handful of cash. She said he had always wanted to get me a rocket as a gift, but didn't really know much about buying one, and while he was sick he didn't have funds to do so anyway. She asked that I use the money to buy a rocket, and that I fly it in his memory.

She gave me too much money. I only fly low power, owing to field size limits, my own cheapness, and the huge pile of LPR engines I presently own, and she gave me enough to buy pretty much any LPR kit I might want with cash left over.

I asked my wife what she suggested I do, and she said to get a sci-fi inspired rocket, as my friend would have enjoyed that the most. My very first thought was the Atlantis... I always loved it in the catalog back in the day, but never bought one. I figured, no problem, someone has a kit or parts or something... but other than the "refit" version, nobody seems to have the fins.

And of course, I want this to be PERFECT. He was my best friend, after all. So laser-cut fins are what I'm hoping for.

If I just plain can't get it, the USS America reproduction is my second choice. That, at least, I can get. But USS Atlantis is just cooler.

Whatever I build, I'll fly it, as I believe all rockets should fly, but only sparingly. Special occasions, you know?

Semroc came through for me, as always. Carl McLawhorn (may he rest in peace) even threw in the special Atlantis rings and details, laser-cut from fibreboard. I got the necessary decals from Sandman at Excelsior Rocketry.

Real life then intervened. By the time I was free to work on the rocket, I had honestly forgotten it. But last month was the anniversary of my friend's passing, and that was all the reminder I needed. 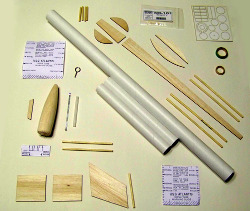 So I've started working on it. Here's a photo of (most of) the parts. The parachute and shock cord aren't in the pile; I'm awaiting a shipment of Kevlar which is delaying me slightly. No, I'm not building the rocket entirely original... why use a folded-paper shock cord mount when you know better? As far as the parachute goes, I'll just use a standard Estes unit with a snap swivel on it from my range box, so there's no point including one here. 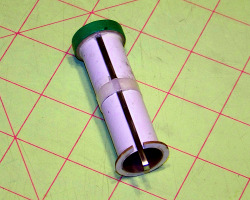 And here's the engine mount, assembled. This is where I stopped building for the night (having cut all those dowel pieces first).

I'm thinking strongly that I will review this rocket build for rocketreviews.com.