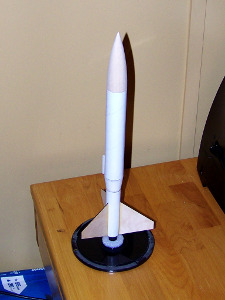 Today I finished the primary assembly of my FSI Sprint clone. I started by cutting a piece of a paper clip, mainly the large bend with a bit of leg on each side, then bending the lower part of the legs outward at 90° angles and twisting them slightly. I cut matching notches in the upper #8-#11 ring, then laid the paper-clip loop in them so that the bent legs would hook under the ring. The point of all of this was to create a metal shock cord mount for a reusable shock cord. I intended to take a picture of this part, but just plain forgot.

The next step was to mix up epoxy to secure everything. I put the coupler and ring subassembly on this way, with epoxy slathered around the underside of the upper ring to secure both the coupler and the legs of my metal shock cord mount. I applied more epoxy to the lower end of that subassembly, both to secure it to the #8 lower tube and to secure the shroud, which I immediately put in place, lining it up with the launch lug line as previously planned. All these parts except for the shock cord mount fight somewhat tightly, so I didn't have to hold them together.

Incidentally, I put the shock cord anchor on the opposite side of the tube from the launch lug line, in hopes of balancing the small weights against each other. Not sure it even matters, but it seemed like the right thing to do.

With all of that put together, I used a small flashlight and a skewer to clean up the inside of the sustainer, removing blobs of epoxy wherever it seemed to have puddled. Afterward, I used a long, thin piece of wire to hook into the shock cord mount to keep it from sticking to the side of the upper tube, then put the entire assembly upside down until the epoxy was firmly set.

No, I didn't tie on the shock cord first. This mount is supposed to be replaceable... if I can't put the original shock cord in after the rocket is assembled, it's hardly replaceable. I'll use that same long, thin wire to hook the cord and pull it through; it's a bit of a chore, but I've done similar things with another rocket so I know it's possible.

Later, after the epoxy was firmly set and no longer tacky, I used yellow glue to affix the fins. I had a Semroc fin guide from one of their RTB kits which I used to keep the fins lined up until they set. They have been filleted twice with yellow glue at this point and are basically done, so as I said above, this completes the primary build. Only the shock cord and parachute installation remains, and I'll do that after it's painted. 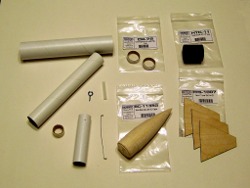 I got my parts order from Semroc today. The image at right (click it for a larger view) shows both the parts I ordered from Semroc, listed in the previous post, as well as parts from my stockpile. Also shown are the laser-cut fins I didn't know Semroc sold for the Sprint... I found them in the list while putting my order together. FFS-1007 is the part number, should anyone else want to build one of these. 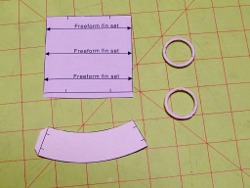 Here is a picture of the parts I had to make myself, namely the #8 to #11 centering rings, the transition, and the fin alignment wrap. Both of the latter parts are courtesy of OpenRocket, an indispensable part of my virtual toolbox (and the only part I didn't write myself).

The centering rings are made of photographic mat board, using my centering ring generator instead of the OpenRocket designs, which seem a bit large by comparison. The mat board kept trying to delaminate as I cut it, probably because the radial thickness of the rings is so small (about 0.22"). I ended up gluing layers back together to make them, and yeah, they are ugly, but they do appear to be properly centered after all that cutting, gluing, and sanding. 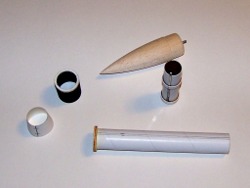 Here are the parts assemblies, glued and waiting for complete drying. One of those ugly rings is glued to the coupler, while the other is on the end of the lower tube (which as you can see I have marked with double fin lines for better alignment). You'll see the reason for this arrangement of rings in my next post. The engine mount is assembled in the usual way; I notched the inside of the ring that goes over the engine hook so it would not deform the tube. CA has been applied to the upper part of the engine hook, but most of the rest of the parts are assembled with ordinary yellow wood glue. 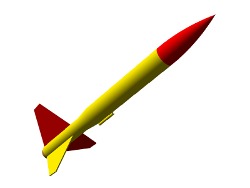 I've become a fan of the forgotten, unloved rocket kits of the past. Ever since I built a clone of the Centuri Stellar Hercules, I've been looking for other old kits that have been forgotten. One such rocket is the FSI Sprint, a parachute duration kit made from 1970 to 1996.

I got the "Early" and "Late" plans from oldrocketplans.com, but the most useful thing for cloning the Sprint is the diagram in the 1970 FSI catalog on Ninfinger's site. It contains measurements for some of the components, a great boon to the cloner.

I've noticed, looking through photos from various sources, that the FSI Sprint changed shape several times during the production. In particular, later Sprints used a longer piece of slightly larger diameter tube for the bottom section. So I don't feel like I have to slavishly follow the plans in this case. I'm going to call this an "interpretation" of the FSI Sprint, rather than a straight-out clone.

The 1970 diagram shows 3" of the lower tube exposed. Later FSI catalogs show a longer lower section, though I have not found an exact length for it. The "Late" plan lists an overall length of 15"; allowing 3.5" for the nose cone (as shown in the 1970 diagram), 5.75" for the upper tube, and 1" for the transition gives a total of 10.25", leaving 4.75" for the lower tube. Since I'm not trying for a perfect reproduction, I'll accept a lower tube exposed length of anywhere between 3" and 4.75".

The FSI kit used a balsa transition, hollowed out, but I'll use a paper transition instead, as a matter of personal preference. I find it's easier to deal with a paper transition if you have a coupler between the rings. Semroc sells a coupler for ST-11 that is 1.25" long. Add to that an inch for the transition and the range of lengths for the lower tube will need to be between 5.25" (for 3" exposed) and 7" (for 4.75" exposed).

To be clear, I'm not going to cut either tube, I'm just going to use them the size they come from Semroc.

Using strictly Centuri-sized parts would ordinarily mean I wouldn't have to make my own centering rings; however, Semroc does not carry a CR-811 ring set, nor can I find one elsewhere. At least the CR-78 size is available.

The fins are one part that apparently varied a lot. While all versions claim to have birch plywood fins, the shape appears to have varied several times; the shapes shown in the Early and Late plans are different from each other, and neither one matches some of the catalog photos or diagrams. After doing some looking I decided I liked the Early fins better, so I've reproduced them in my OpenRocket file.

The rocket has a 1.33 caliber margin of stability with an Estes C6-5 loaded.

If all goes well, I'll probably do my own decal for one fin as with several of my other rockets, since, like the design, the decoration of the FSI Sprint varied over the years also. A roll pattern might be nice as well.

I have the thrust rings, engine hooks, launch lug, etc. in my stock already so I don't need to order them.

Here's my OpenRocket file for this build. It's quick-and-dirty, with small details like the engine hook, screw eye, etc. omitted.