It just hasn't been a good year for rocket launching in Northeast Missouri. Today was my first real opportunity... it was fortunate that I was able to get off work early. The wind was moderate but variable, probably topping out at 10 MPH. Though Justin and Jaclyn, my 4-H rocketeers for the last several years, were unavailable, my wife Tracy and daughter Taylor accompanied me. All the pictures below are courtesy of Tracy. Click the pictures for a larger view. 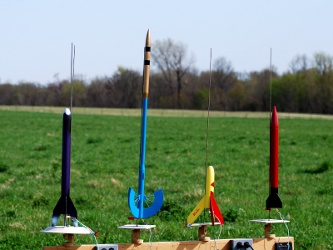 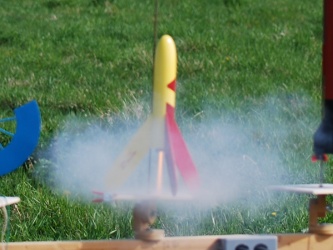 First up was my Mo' Skeeter, on my last B4-4. It was a picture-perfect flight, though it was fast enough going up that Tracy couldn't catch it in the air. 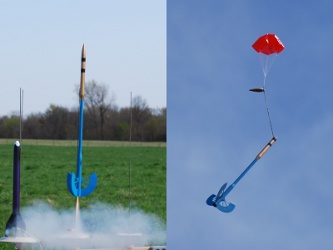 Next we launched my Celestial Navigator on a C6-3. This was the first "nominal" flight for this rocket... the first time it didn't scare the heck out of me and/or crash when recovering. Update: Apparently, the 9/18/2010 flight was good also, and I just forgot about it... that's why I keep these pages up. 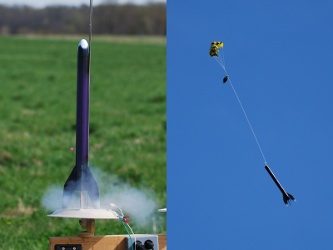 I built this Big Bertha for Taylor, and she painted it just a few days ago. It has a Semroc baffle with a Kevlar leader, and it suffered about a quarter inch "zipper" from the Kevlar. Deployment was a bit late, which turned out to be par for the course today; likely this contributed to the zippering. I've repaired it already, and I think I'll be able to completely hide the repair. And, of course, I've taped the Kevlar to prevent this from happening again. 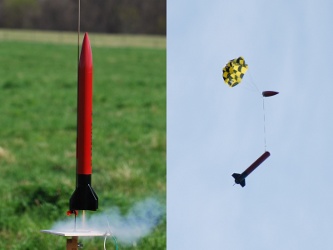 We launched my Patriot X on a C6-5 engine next. It was a high, fast flight, with probably the best deployment of the day. 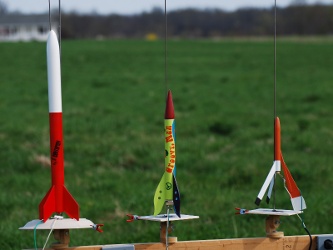 Second Rack, minus one

Somehow the last rocket on the rack got missed; it's Taylor's Screamin' Demon, back from a watery grave with an all-new body tube but the same fins, nose cone, and long yellow plastic streamer. Look below for the launch. 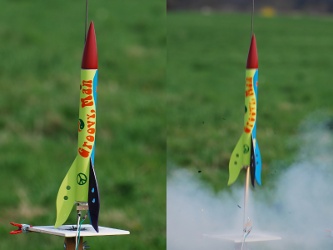 First up for the second rack was my Groovy, Man on a Quest A6-4. I swear, this is the last time I use an A6-4 in this rocket... next time, it's a B6-4. It was a low flight, and deployment was scary late, but it was recovered with no damage. 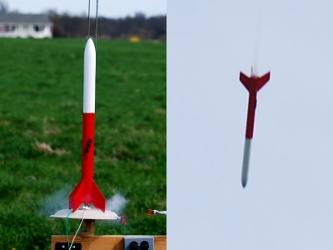 My New Centurion was up next, on a C6-5. This is the best choice for this rocket with its single 18mm mount. Next time out, I'm putting the 2x18 mount in. 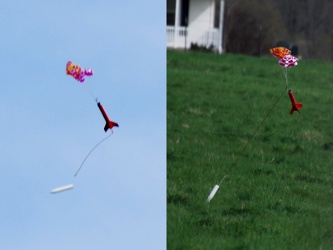 Deployment was a bit late, but the dual chutes I mounted this time made for a pretty recovery. 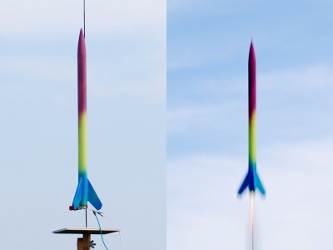 Here's that Screamin' Demon I promised, launching on a C6-5. It really moves off the pad, and it drifted a surprising distance considering the slick plastic streamer, but was recovered with no damage noted. 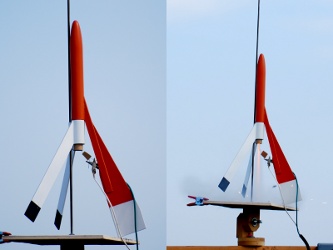 I launched my Cyclone on an A10-3T, not the recommended engine but I've got a ton of them. It was a good flight, but both parts hit the top of the landowner's machine shed, and the upper section is still there. Hopefully it will blow down and be recovered before it gets rained on... but if not, I can always build another. 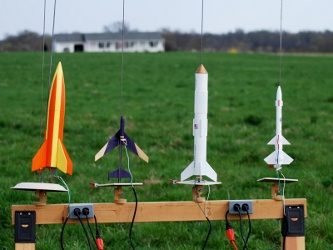 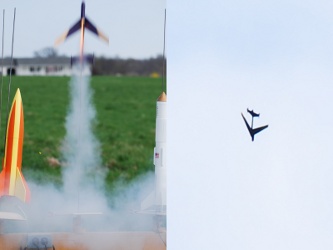 First off the third rack was my Semroc Hawk, on an A8-3 engine. Not recommended, but it seemed to work okay. The Hawk dived more than glided, but as usual that's my fault. Gliders and I don't get along all that well, but I keep trying. 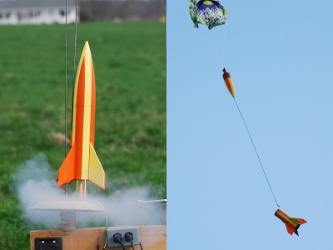 I loaded up my Big Daddy 4x18 with four Estes C6-5 engines and four Quest Q2-G2 igniters. Let me say right now, for clusters these igniters rock. The flight was fast and noisy, and the deployment a bit late; the Estes chute was damaged, and one side of the Kevlar harness broke... I was lucky to get it back essentially undamaged (other than that Kevlar leader). No idea how I'm going to fix it, but I'm sure it will fly again. 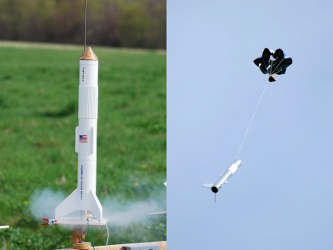 I put a C6-3 in my Pharos rocket for the next flight. This fat, draggy rocket really needs a C6-3 for a good flight, though I have some Quest B6-2's I may try next time out. Deployment was late, but I expect that with Pharos... according to simulation, there just is no way to get a gentle deployment with this rocket. So, it has an extra-heavy-duty parachute with a spill hole permanently installed. The upshot is, it came back with no damage.

Last was my Custom SAM-X on a Quest B6-0 to Estes A8-5 combo, same as last time, and just like last time, the booster engine came out of the booster but the flight was nominal otherwise. This one deployed pretty close to apogee, amazingly for today. 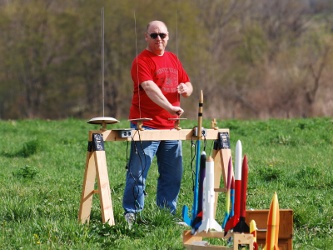 Tearing down the launch stand

Tracy took a few pictures of me, taking down the stand and packing up. I kind of like this one with my rockets in it.

It was an excellent way to start the flying season. I launched twelve rockets, and returned with eleven and a half... not bad overall.