The weather hasn't been very conducive to rocket launching lately, but we needed to get the 4-H launch done before the Fair. So, when we saw that Father's Day was predicted to be nice, we decided to have the launch at 5:00pm. The wind was light, perhaps 5-10 MPH and coming from the east; we did have some drifting problems as a result of that.

Besides Justin, Jaclyn, and I, we had two new members flying with us. Their parents have not authorized me to use their names or pictures, so I'll call them T and J. T and J both had two rockets; each had a Semroc Astron and an Estes Baby Bertha. T's Astron suffered some damage while being sanded, but they were able to make basic repairs in time. All the 4-H rockets for this year flew in primer, allowing them to be easily cleaned up in the case of flying damage. Justin and Jaclyn each also flew one of their rockets from previous years.

Most of the photos below were taken by Tracy, but some were taken by Bob Benton, another member of the Canton Camera Club; I've credited his pictures specifically where they appear. 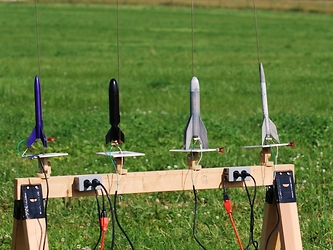 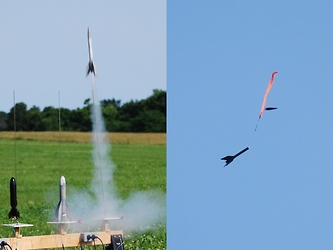 We intended to start with J's Baby Bertha, but it wouldn't ignite. We moved on to T's Astron, flying on a Quest A6-4. It was a good flight, but it drifted more than I would have imagined and landed on the landowner's machine shed. We were able to recover it later. 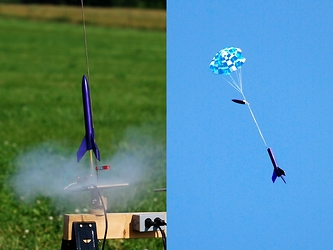 So we adjusted the stand, and launched Jaclyn's Alpha on an A6-4. The Alpha was planned to be one of her show rockets a couple of years ago, but painting issues cause her to leave it out, and up to this point it had never been flown. It was also a good flight, but despite the adjustments to the launch stand, it drifted onto the landowner's OTHER machine shed. It was also recovered later, but strangely, the white label from the engine casing became glued to the inside of the engine tube and I had great difficulty removing it. Jaclyn has decided to retire this one after one flight... possibly she might change her mind later. 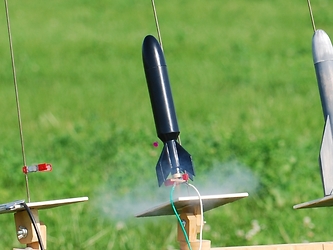 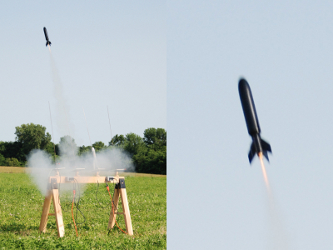 Bomb in Flight - by Bob Benton

Justin's Bomb was next, flying on a C6-5 (and really, this rocket shouldn't fly on less than a C engine). Five out of six shroud lines tore out at ejection, and the rocket came in rather hard, breaking off two fins. All pieces were recovered, and the Bomb will fly again. Maybe next time on a C6-3. 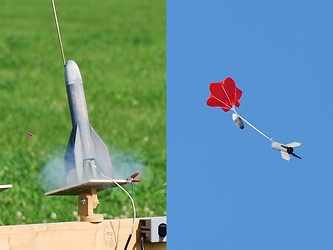 I pulled the igniter plug from J's Baby Bertha, and found the wires touching. A quick adjustment later, we were able to fly it. J flew it on an Estes B6-4. It was a good flight, the first "nominal" flight of the day. (Update: this is his Fair rocket; click here to see how it did). 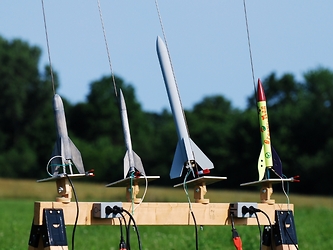 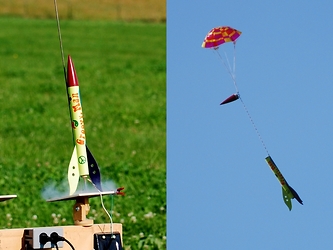 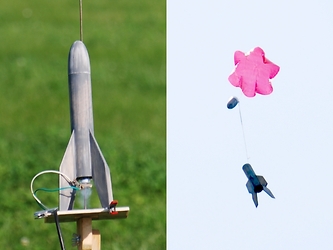 Next we flew T's Baby Bertha on a Quest B6-4. I wanted to see the difference in flight profile between the Estes and Quest engines; except for the black smoke, I didn't see much difference. Note that this was apparently one of the German Quest B6-4 engines. (Update: this is his Fair rocket; click here to see how it did). 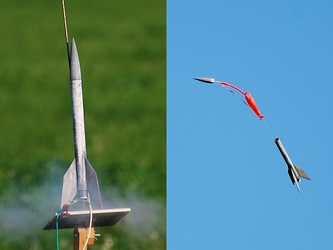 J's Astron went up next, on an A6-4, and except for not landing on a machine shed, it was a duplicate of T's Astron's flight. Note that the streamer tangled in the shock cord... first time I've seen that. 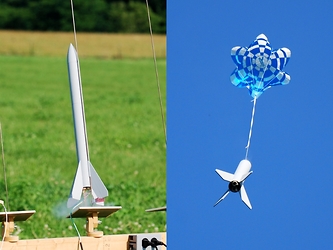 We flew Jaclyn's Goliath on a cluster of two A8-3 engines next. The Goliath kit comes standard with optional 1x18, 3x18, and 1x24 engine mounts, but after some discussion Jaclyn decided to build it with 2x18 instead. It was a faster liftoff and a lower flight than I had expected. The two sections recovering separately was cool. Unfortunately, due to the quickness of the flight, we weren't able to get a picture with both parts at the same time. (Update: this is one of her Fair rockets; click here to see how it did). 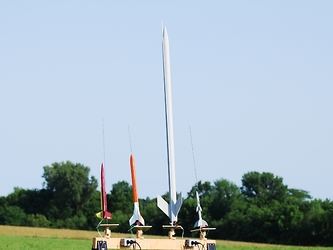 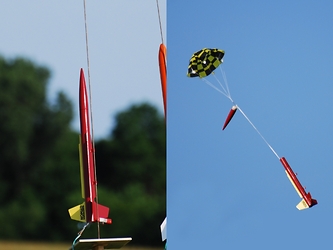 First off the third rack was my Nomad clone, flying on a B6-4. It was a pretty flight and a nice recovery... but the girl who recovered it slipped on the wet grass and crushed it. I'll be building a new one soon. 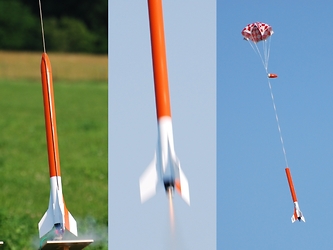 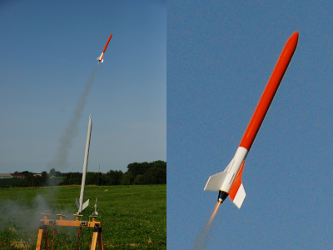 Hercules in Flight - by Bob Benton

With some trepidation, I flew my Hercules clone on a B6-4 engine. It arced over and was heading groundward when the large Fliskits chute ejected. It was recovered undamaged, but I think I'll fly it on B6-2's next time. 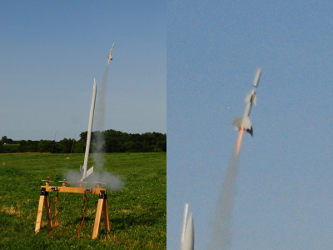 BatRok in Flight - by Bob Benton 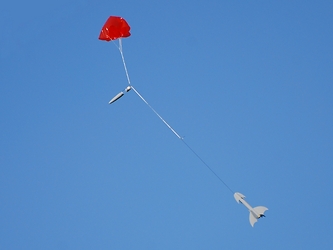 Jaclyn's BatRok flew next, on an A8-5. It took off so fast that we got no launch pictures, but the recovery was fine. (Update: this is one of her Fair rockets; click here to see how it did). 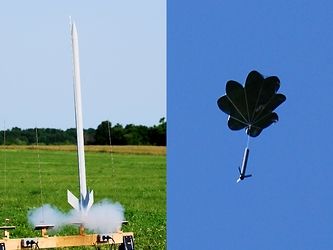 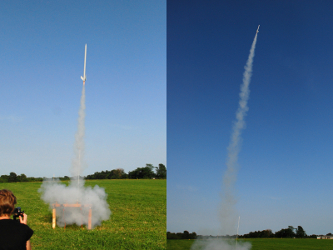 Stripin' in Flight - by Bob Benton

Justin's monstrous Stripin' flew last on the third rack, on 3x E9-6 engines. I called a "heads up" flight, as I was really uncertain how it would perform. But it went perfectly, coming off the stand with authority and flying straighter than any other rocket for the day. The 52" mylar chute also performed excellently... too excellently. It drifted well out of the field, and Justin had to follow in his truck. He returned after a few minutes with the rocket, stating that it touched down gently and then just tipped over. He was very, very happy with its performance. (Update: this is his Fair rocket; click here to see how it did).

Here is our very first launch video. Might as well start out with a big one. 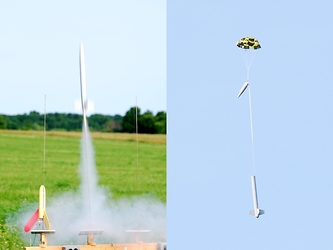 We got no pictures of the fourth rack, which was short one rocket of being full. I wasn't even sure we'd fly a fourth rack, and the light was beginning to fade, but Jaclyn hadn't flown her Hornet yet. So we loaded it up with a B6-4 engine and flew it. It was a pretty flight and a perfect recovery. (Update: this is one of her Fair rockets; click here to see how it did). 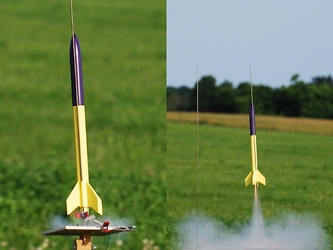 I flew my new Mini-Centurion next, on an A6-4. The rocket arced far over, the result of a too-long ejection charge; that's my fault for assuming it was enough like an Alpha in shape and size to fly well on an A6-4. The recovery looked good, but apparently the nose cone snapped back and broke one of the fins; I'll have to do some creative repair, since the broken piece was not recovered. 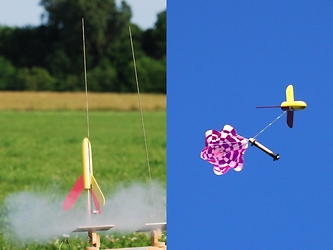 Last for the day was my Mo' Skeeter, on a B6-4, as usual since I ran out of B4-4's. It was a perfect flight and recovery, also as usual. This rocket has never failed to please.

It was a good launch overall, with none of the kid's rockets being damaged. I look forward to seeing them all in their final paint.