My brother Greg is back for the 4th of July holiday, and he brought my other brother Adam's kids with him. I knew that my nephew Jesse had shown an interest in rocketry before, so we planned a launch for today, Sunday the 3rd. I prepared sixteen rockets, thirteen of mine plus three of Taylor's; however, the wind, which had been pretty calm, picked up somewhat, and between that and the fact that I couldn't use the first position on my stand (owing to the rod nut coming loose), we flew only nine. 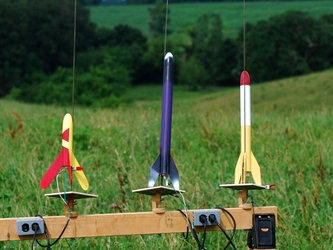 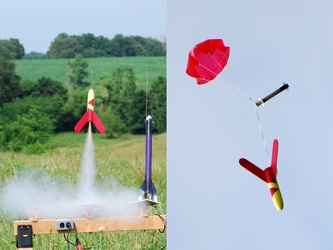 First to fly was my Mo' Skeeter on a B6-4. It turned in a perfect flight as usual, landing not all that far from the launch stand. 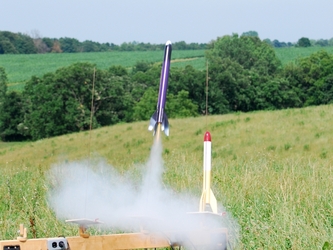 Next was Taylor's Big Bertha on a B6-4. It arced way over, and was pretty close to the ground when the chute ejected; it didn't have time to deploy fully, and there was some damage noted at the upper end of the body tube. I think we'll be able to fix it, perhaps with some superglue as reinforcement for the tube. 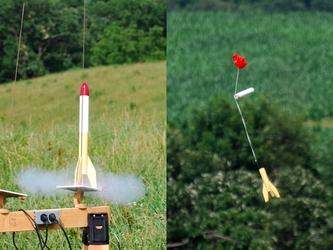 Last for the first rack was my Betsy on a B6-4. The flight up was good, but the parachute got tangled up and the rocket came in rather fast. The extra-tough double fins on Betsy saved her from significant damage, fortunately; however, the nose cone came out of the payload section and was lost. 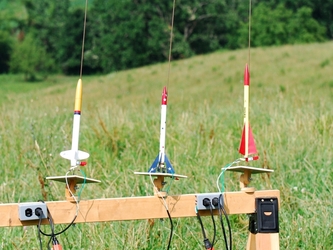 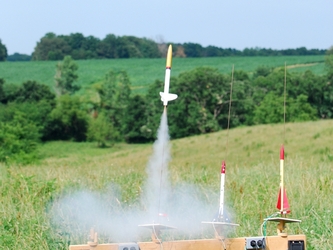 The second rack was my "nostalgia" rack. First to fly was my thirty-year-old Sprint on a Quest A6-4. The nozzle spat out a chunk, causing the thrust to vector sideways, and as a result it was a spinning flight; however, the rocket was recovered mostly undamaged and will fly again. 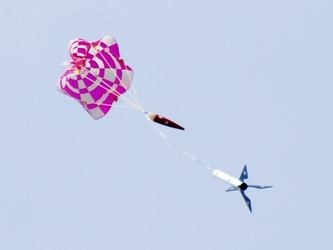 The second to fly was my thirty-year-old Sky Devil on an A8-5. This rocket is the only one I ever sent to the state fair, and not only did it not do well there, it arrived home with a broken fin; I wasn't able to repair it as a kid (didn't know how), but I got it repaired a few years back. It flew a perfect flight, returning on its vintage Centuri chute fairly close to the pad. This will probably be its last flight, as it is looking rather worn at the upper end of the body tube. 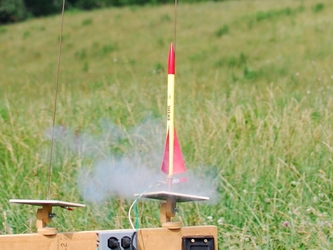 Last was my replica Bandito on a B6-6. It was a high, fast flight, just like I remember from back in the day. The Bandito was the second rocket I ever built, so flying it in the place I first flew rockets was cool. It drifted a lot farther than I expected, likely due to the rising breeze, but my brother Greg recovered it from across the road. Good thing I painted it red and yellow. 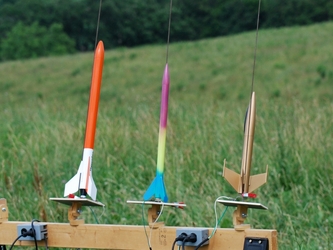 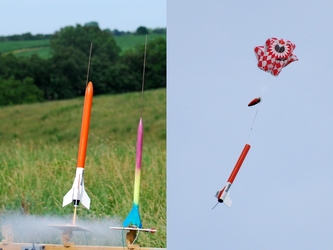 First for the third and final rack was my Hercules on a Quest B6-2. This was an absolutely beautiful flight... the B6-2 is obviously the right engine for the Hercules. Recovery looked really good, too, with it landing close enough to the pad that I got it myself. Unfortunately, at that point I discovered that the engine mount was gone. I'll have to order parts and build a new one... and I'll glue it in a lot better next time. 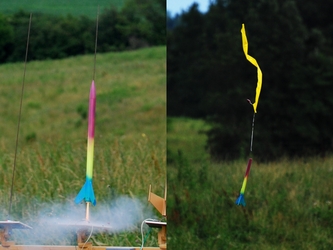 Next we launched Taylor's Screamin' Demon on a B6-4. I had planned to fly it on a C6-5, but the breeze was just getting too strong. It was a pretty flight with a decent recovery and no damage noted. 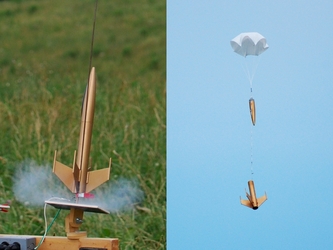 The last to fly was my Star Watcher on a B6-4. It flew much as I expected (it's not a high flier) and the recovery looked good, but I received it back missing one fin. I'll have to make this one, as I don't think I can buy parts for it.