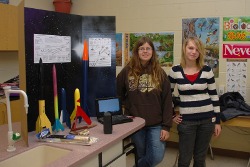 Tonight was the science club "event" at my daughter Taylor's high school. It's not a science fair... there's no competition or judging. Instead, it's a show for the younger (elementary school) kids, to try to give them an interest in science.

So Taylor and her project partner Catherine decided to do a rocketry display, and fly a few rockets. You may recall that a few years ago, Justin did the very same thing, using my large launch stand and a mix of some of his and some of my rockets; but, given the high chance of rain today, I decided to send a basic Estes stand and my best handmade single-position launch controller.

Even better, this time I got to attend. It was about 55°, the sky was overcast, and the air heavy and humid, but there was adequate light and the wind was manageable. And it didn't rain until after we were done.

We took six rockets: Taylor's Quest Screamin' Demon and Estes Viking, my Mo' Skeeter, Baby Bertha, and Betsy (now rigged for a gum-cam), and a rocket Taylor and Catherine built. The latter rocket was kitbashed from a combination of Baby Bertha fins, a long plastic rounded-ogive nosecone from some Estes kit, and the remaining components of a Big Bertha pulled from my parts stock. For convenience, I'm just going to refer to that last rocket as a Big Bertha, since they never named it.

They went out and launched three times, with two flights each time. The first group started with my Baby Bertha on an A8-3; it didn't make it as high as I would have expected, then didn't deploy its chute until it was under 5' from the ground. It suffered a nasty ding to the upper end of the sustainer, and the inside of the tube looked toasted; I'll probably repair it with a coupler and some fresh tube to replace the damaged portion.

The second flight of the second group was Taylor's Screamin' Demon on a B6-4; it was a fast, high flight, but the deployment was a bit late; still, it was recovered undamaged and will fly again.

The second group started with the Big Bertha on a B6-4. It went up nicely, deployed late, and recovered near enough to the launch stand that one of the onlookers was able to catch it.

Next they flew Taylor's Viking on a Quest A6-4; this is the only flight that deployed near apogee, which makes sense given the high density of the air... it really should have been an A8-5, but I'm short on them so I decided to try the A6-4 instead. The rocket deployed perfectly and recovered in the grass near the launch stand.

The last group started with my Mo' Skeeter on a B6-4 (as usual). Despite a slightly late deployment, it recovered well. It appeared that it was going to drift to the roof of the school, but it took a bit of a "hop" as it approached, cleared the roof edge, and landed in a rose bush. I was able to retrieve it from the bush without damage to either the rocket or myself.

The last flight of the day was the Big Bertha on a C6-5 (requested by Taylor). It deployed about a second after apogee, and the chute and nose cone separated from the sustainer; though it looked like the sustainer might survive the recovery, it fell far from the pad and was not found. The nose cone drifted away on the 16" chute I had given them, and so the whole rocket was lost.

I elected not to fly Betsy, as I didn't want to run the risk of losing my camera in the wind. A prudent precaution, I think. Still, considering the weather conditions, and the fun had by all, I consider it a good flight. And who knows? They may do it again next year.