Wow, almost a year since my last launch. My wife and daughter are working tonight at the county fair, and I was going to be there too, watching the motocross races; but the almost incessant rains (including an installment yesterday) made the dirt in the arena too soggy to build a track on it.

So here I am bored, nothing to do and nothing good on TV... but there's almost no breeze, the sky is blue and pretty, and I have rocket engines. Launching in my back yard, I have to stick to mighty small ones, but I managed to burn three A10-3T and one 1/2A3-4T and it was good. 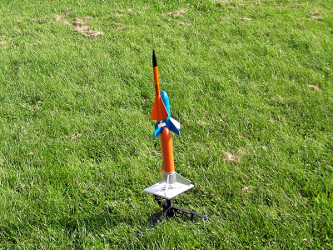 Here they all are, standing uncomfortably close together for their family picture... Seriously, it's the easiest way I've found to carry a small number of rockets to the field. 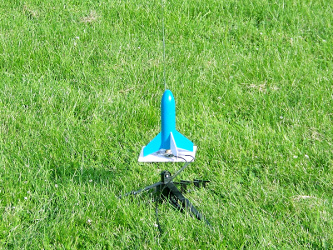 I started with my Lowball on the stand, but it wouldn't ignite. I thought I'd broken the igniter, so I put the Cobalt on the stand in its place and it wouldn't ignite either. One trip to the house for fresh batteries, and the Cobalt took off beautifully on an A10-3T, and came down so close to the stand that slow old me managed to catch it! The Quest plastic streamer retainer didn't retain the streamer very well (i.e. at all) but that's easily enough fixed. 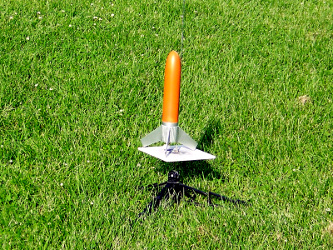 Lowball On The Stand

Next up was my Lowball on A10-3T. It flew well, and even though I deliberately rigged it with no wadding it came back fine. Lowball has an extended engine tube (I call it a "stinger") in the lower section that allows me to put the streamer out of the direct line of "fire" from the ejection charge. So far, so good for that recovery method. 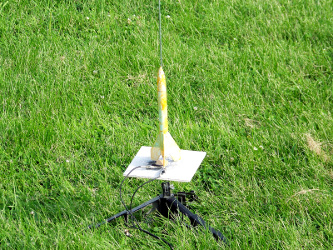 Next was my Astron Mark on an A10-3T. It flew like crazy, out of sight (though in fairness it's a light-colored rocket and there was a bit of haze in the air) but it landed within the yard, undamaged. 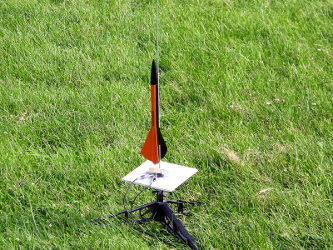 Last was my Lo Flier on the only 1/2A3-4T of the day. I reoriented the launch stand, as the Mark had drifted rather close to the road; Lo Flier tried to make a lie of its name, flying very straight and drifting to the opposite edge of the yard from where the Mark had recovered, and was recovered undamaged.

Now if the weather would just cooperate, I'm ready for another big 4-H launch!