All the rain we've been having has made planning a launch for the 4-H kids a bit hard, but looking at the forecast last Friday it became clear that we might be able to launch on Sunday. A flurry of Facebook messages later, we had planned to meet at a field near one family's residence. The field had wet spots and a few inconvenient trees, and it was hot, but all in all the launch went pretty well. Note: Though this was officially a 4-H launch, not all of the kids who flew were 4-H members. Just in case anyone wonders. 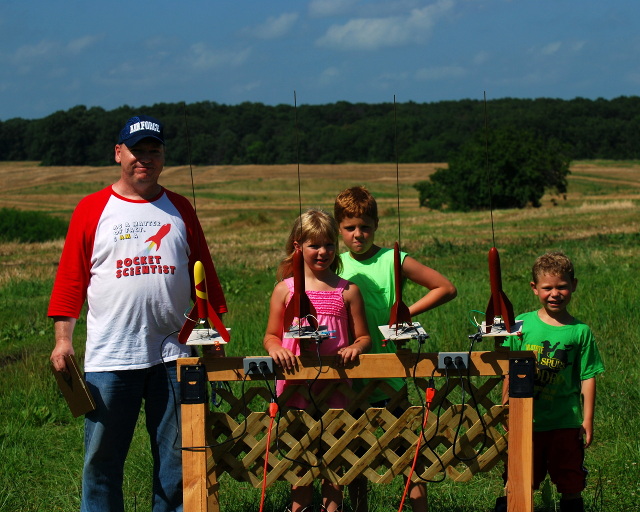 The first rack included my Mo' Skeeter (as the wind tester), Lexi's Baby Bertha, Jacob's Semroc Astron, and Braydon's Baby Bertha. Well, that's what it was supposed to include... but Braydon got his Baby Bertha mixed up with Ethan's, and that's what he launched. 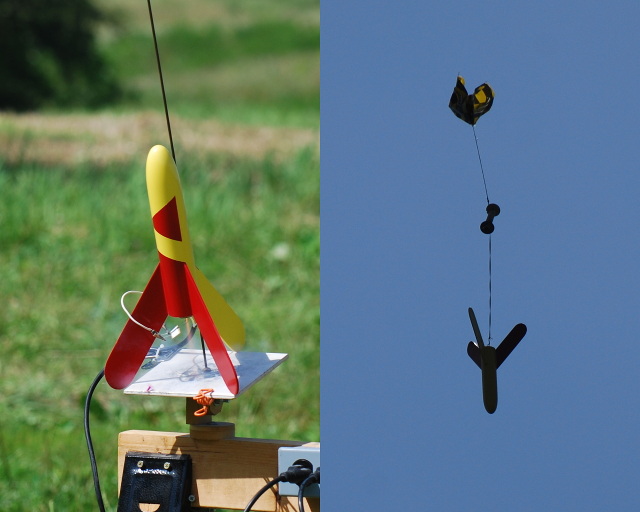 As I said, first up was my Mo' Skeeter, flying on a B6-4. The chute didn't open fully, but the rocket recovered okay except that it drifted in an unexpected direction, narrowly missing some trees. After this flight I adjusted the remaining stand positions. 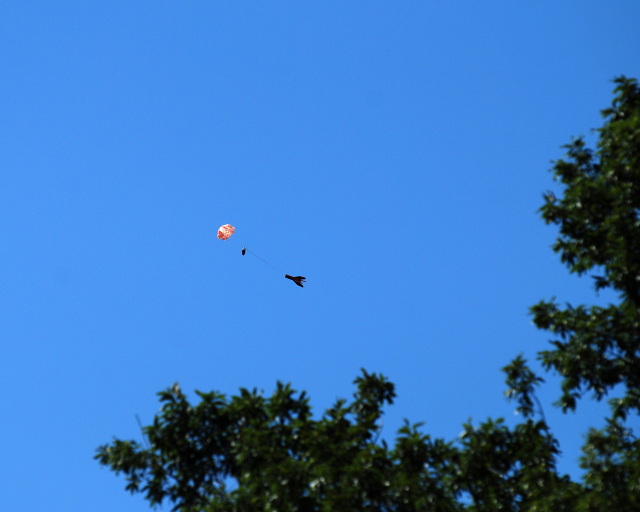 Lexi's Baby Bertha flew next on a B6-4, and it also wandered into (and missed, fortunately) the trees. So I adjusted again, as she and another girl and a couple of the boys walked off into the tall grass to look for it. It was found and returned just fine. 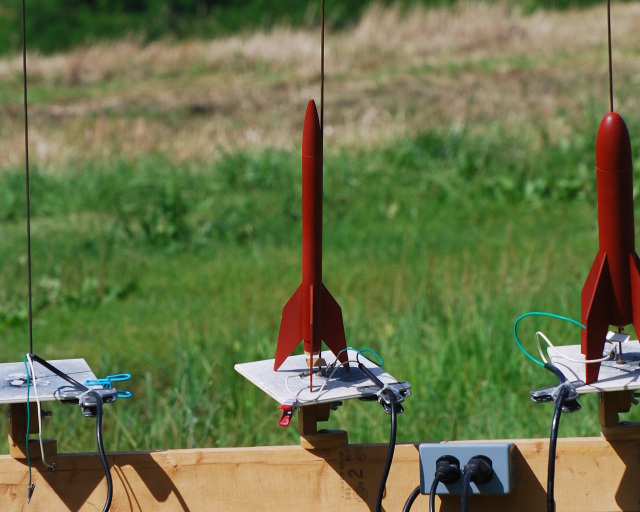 It still wasn't enough. Jacob's Astron (flying on an A8-3) managed to drift high up in a tree. It was gotten down eventually, but two fins were badly damaged. Jacob and Lexi each had a single rocket, and were planning two launches each, but Jacob couldn't do a second and Lexi decided not to risk it, despite the good performances we had later. 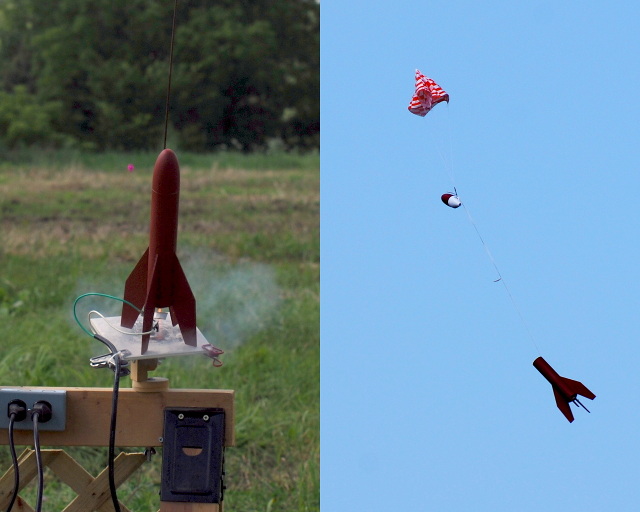 So we picked up the whole stand and moved it quite a ways east to avoid the trees. The last rocket on the stand was Ethan's Baby Bertha on a B6-4, and it turned in the first "AOK" of the day; it was launched by Braydon, who had not yet realized his mistake. 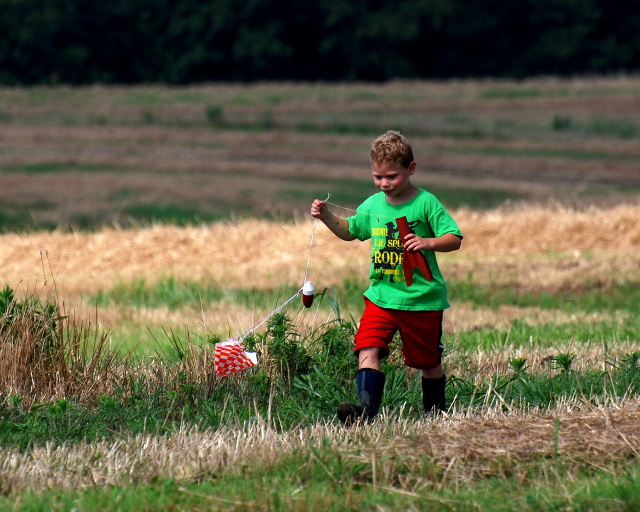 Here's Braydon returning with Ethan's Baby Bertha. We marked the rockets on the insides of the tubes to identify them; I suspect it was at this point that Braydon realized he had launched the wrong rocket. To his credit, he came right to me and told me about it. 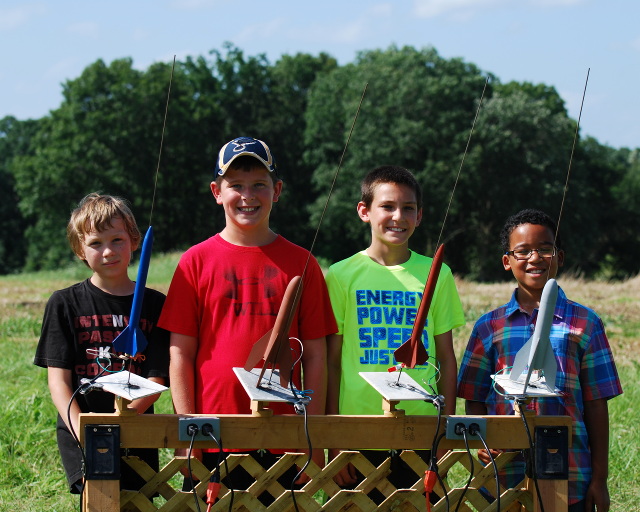 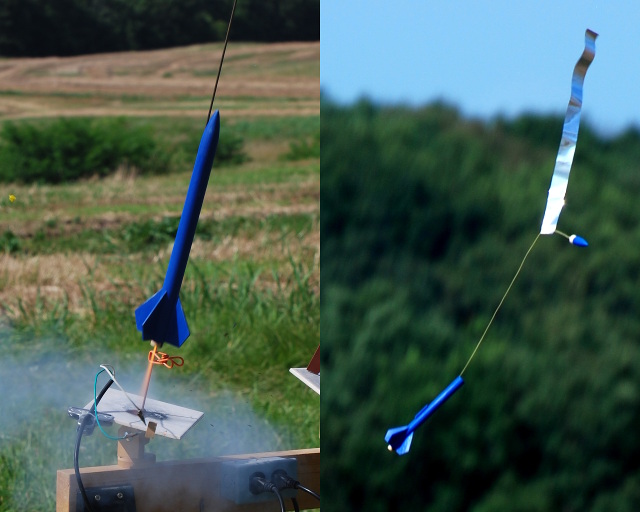 Carter's School Rocket went up quick on an A8-3; I was surprised what good performers these rockets were. It recovered fine, though he had to walk a good ways to get it. 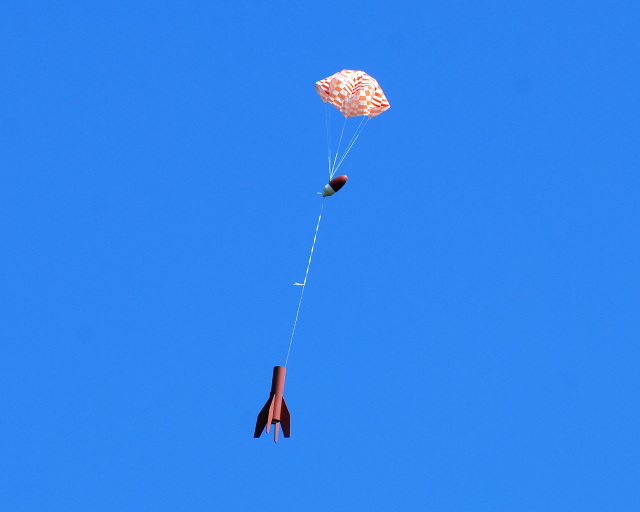 Clayton's Baby Bertha flew on a B6-4. I had apparently overcompensated for the wind, as it drifted into the trees behind the launch area and got hung up. With adult assistance and a long stick it was recovered in good condition. 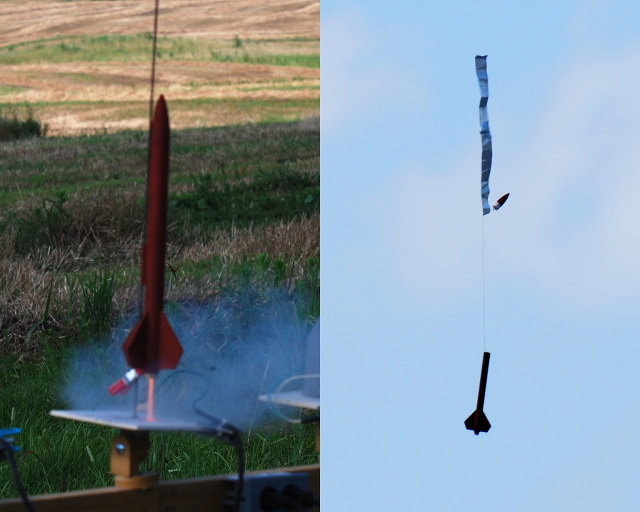 Ethan's School Rocket flew next on an A8-3, and turned in a good flight. I finally began to feel like I had the stand adjusted correctly for the gentle yet somewhat confused wind... it felt like it was blowing from SSW, but maybe 100 feet or so up seemed to be blowing from ESE. 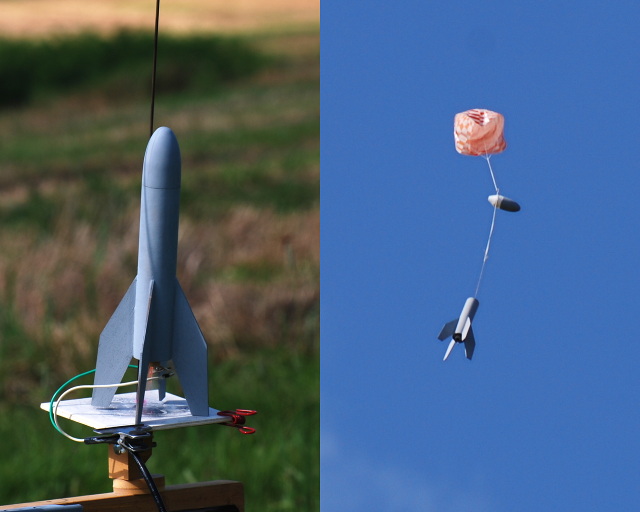 The last rocket of the second rack was Landon's Baby Bertha, flying on a B6-4. It flew well and was recovered in good condition. 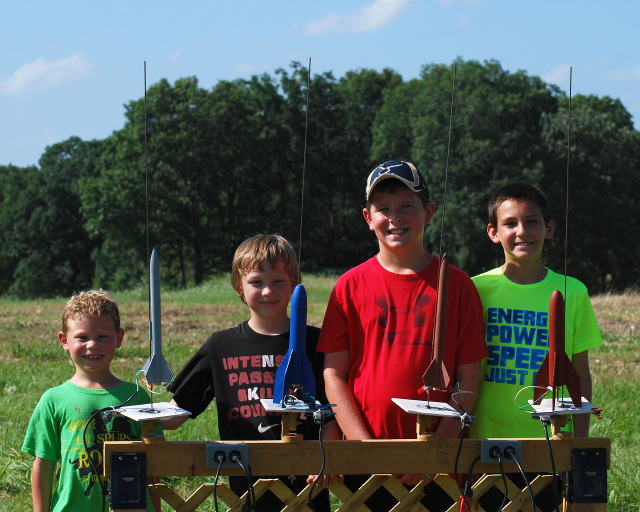 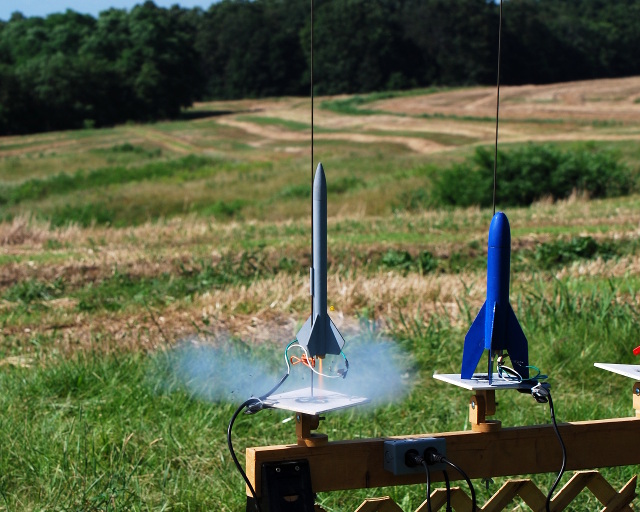 Braydon's School Rocket flew on an A8-3, and recovered in good shape except for some scorching of the streamer; however, it is still serviceable and will probably not need to be replaced just yet. 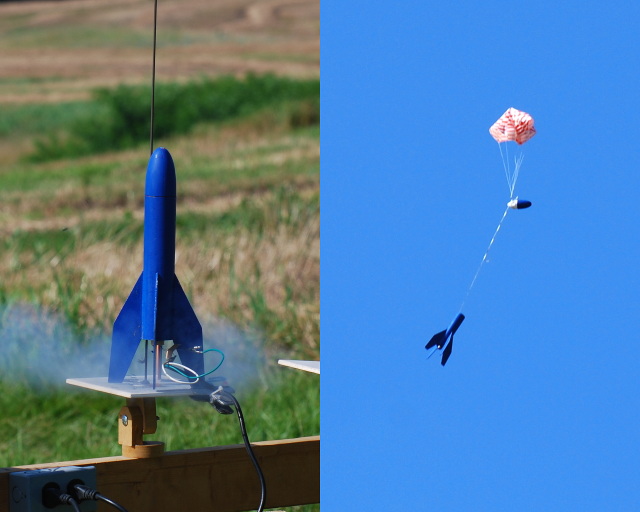 Carter's Baby Bertha flew well on a B6-4 and recovered nicely. I was very pleased with its performance. 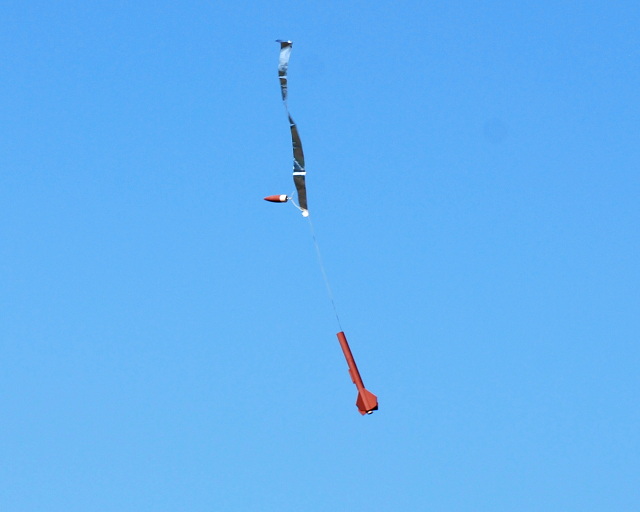 Clayton's School Rocket flew next on an A8-3, and also turned in a perfect flight. 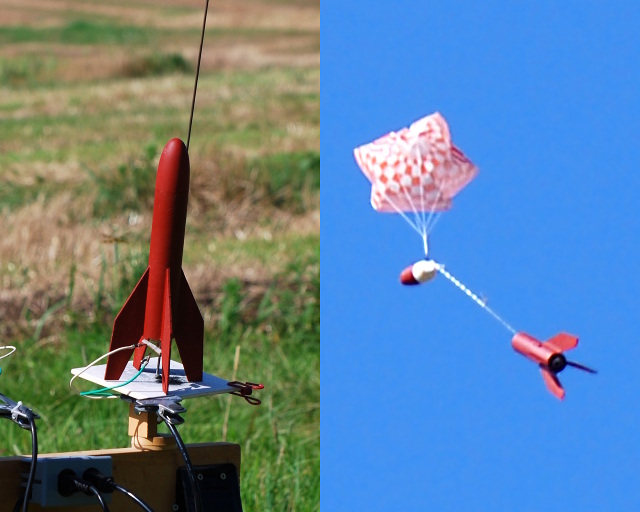 Ethan launched Braydon's Baby Bertha on a B6-4 last. A change of some sort in the upper-level winds pushed it into the pond we had managed to avoid all along; it was recovered, and had surprisingly little damage. It will likely fly again. 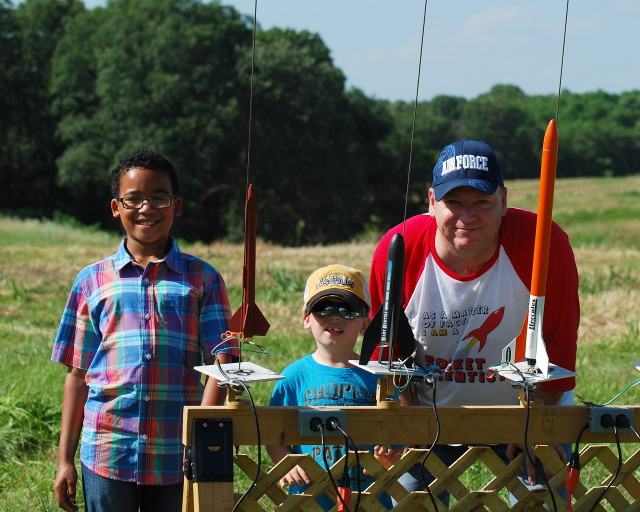 The fourth and last rack of the day would have included the second flights for Jacob and Lexi's rockets, but as previously noted those flights did not happen. However, one little boy who had tagged along at the build meeting talked his father into getting him a rocket, and he was present at the launch and wanted to fly. So the fourth rack consisted of Landon's School Rocket, Uriah's Baby Bertha, and my Stellar Hercules.

Landon's School Rocket flew first on an A8-3, and turned in a perfect flight. 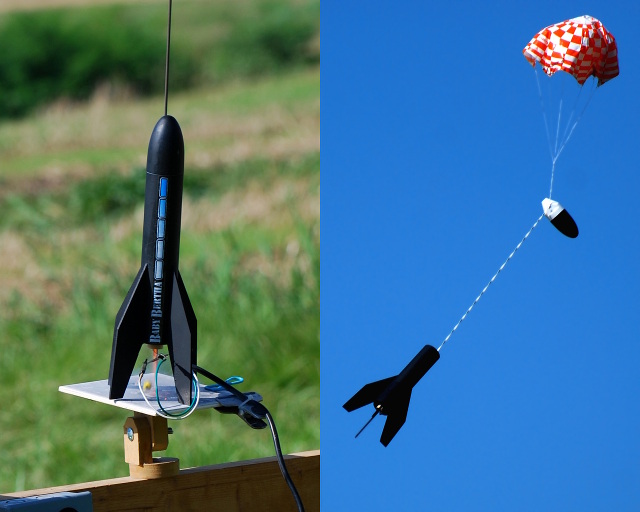 Uriah flew his Baby Bertha on an A8-3 next. It flew well and recovered surprisingly near to the stand. 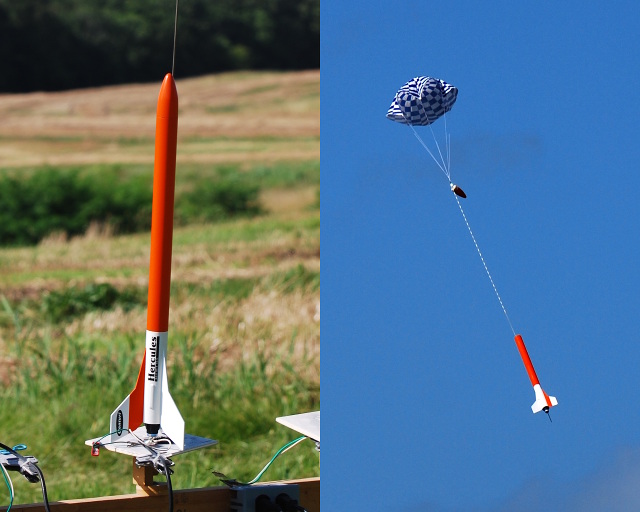 Last up was my Hercules, flying on a German-made Quest B6-2. It turned in a picture-perfect flight, though it drifted a bit on the large chute I had outfitted it with. It came back a bit dirty but entirely unharmed. 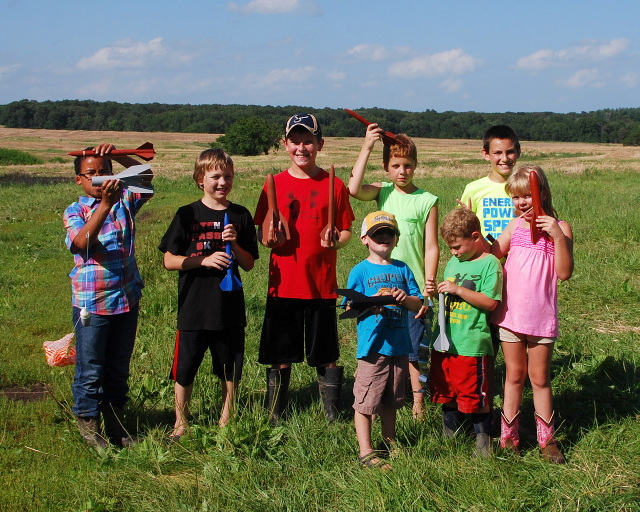 Here is a group picture of all the kids who flew rockets with us. I believe a good time was had by all!