I've been hoping for a good chance for a launch all year. Last week I watched the forecasts for Sunday the 20th with anticipation; by Friday it seemed obvious we would have just the right sort of day for a launch, and the field I usually launch in was freshly mowed and baled, so I notified the parents of the 4-H kids I led this year; of the seven kids I had in the project, three were able to make it. Add to that Joe Coehlo, a member of the Canton Camera Club (as are my wife and I) and another friend, Tim McAfee, who had never been to a launch before. I'd call the turnout excellent.

Sunday afternoon's weather was about as good as expected, mid 70's with a somewhat variable wind averaging maybe 5 to 7 MPH. I prepped sixteen of my own rockets, but didn't quite launch all of them; the kids brought theirs, but only two of them chose to launch. All in all, we had eighteen launches for the day. 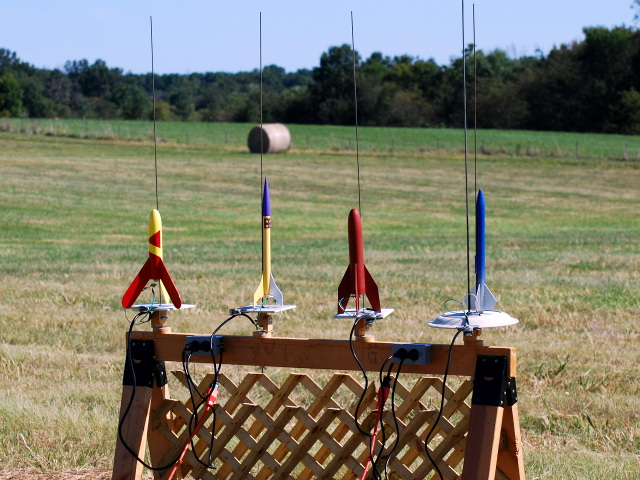 I set up four positions on the first rack, but could not get continuity on the fourth position. While checking the clips, I bumped the third position and the rod, deflector, and rocket just fell off... gah. The rods screw into nuts glued into the stand positions, and the third position's nut had pulled out.

So I pulled Carter's School Rocket out of the rack and rigged the third position's clips to the fourth stand position, and that's how we made all our flights for the day. 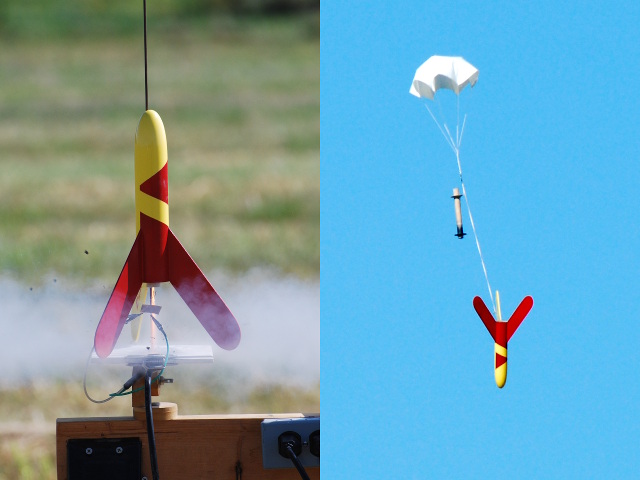 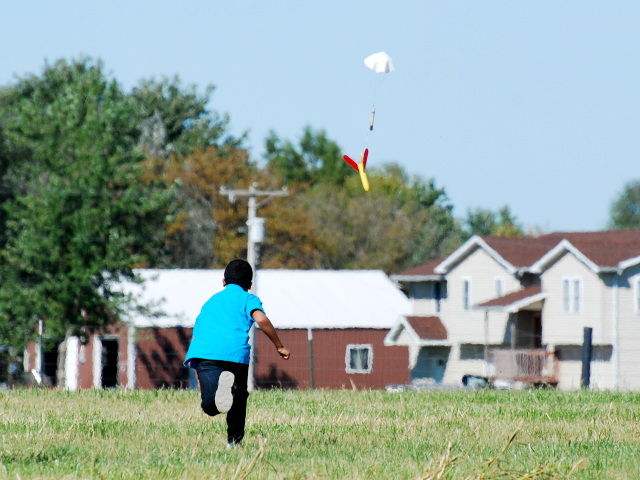 First up was my Mo' Skeeter on a B6-4. It turned in a beautiful flight, as always, drifting back to the north more than expected but recovering inside the field. 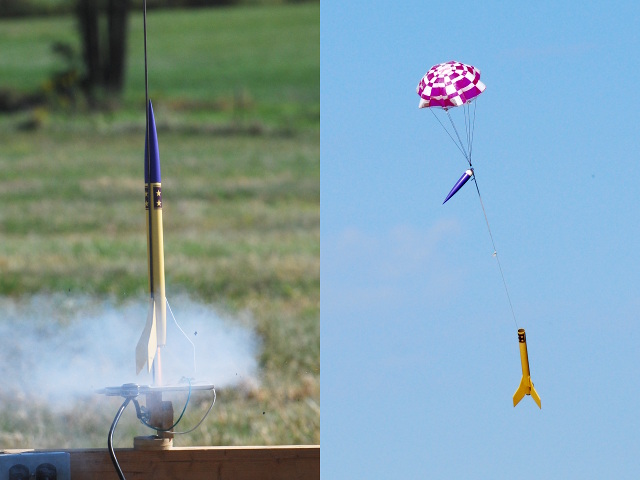 Next was my Semroc Starfire on an A8-5. Deployment was a bit late, but it recovered just fine not all that far from the launch stand. 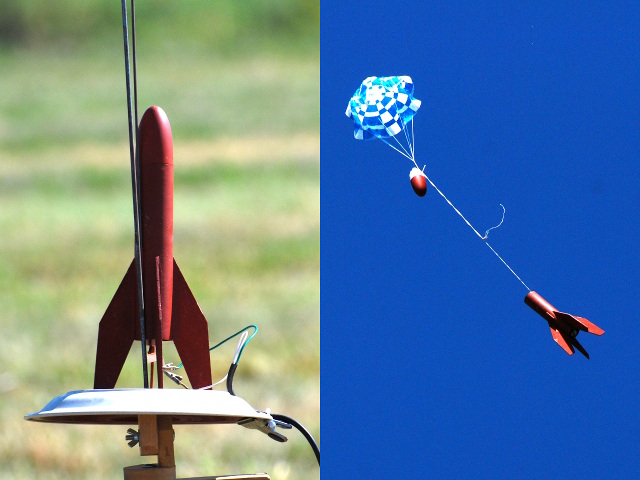 Last on the rack was Braydon's Baby Bertha on a B6-4. Launch and recovery were fine, though again with a northward drift that I attempted to compensate for in the next rack. 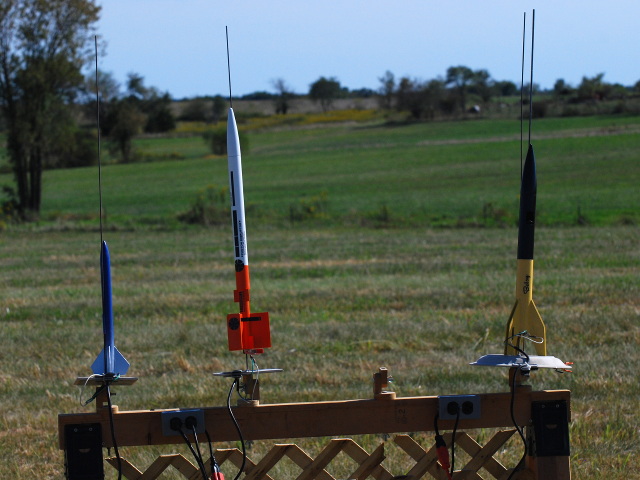 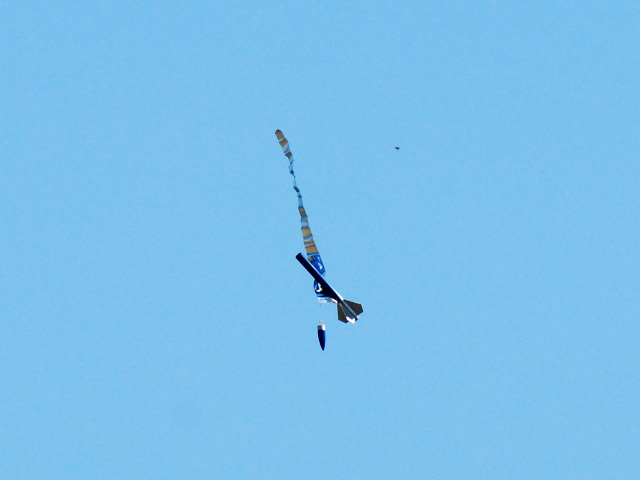 We started the second rack with Carter's School Rocket on a C6-5. It flew very high, angling a bit to the south (as I had tilted the rods southward to address the drifting issue). It was recovered in good condition. 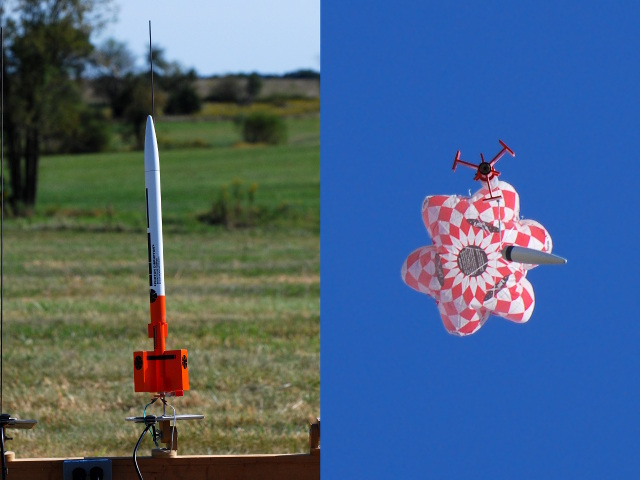 Next was my new Photon Disruptor on a B6-4. The flight wasn't very high, which is perhaps not surprising for a somewhat heavy, draggy rocket; next time I'll definitely use a C6-5. The recovery was good. 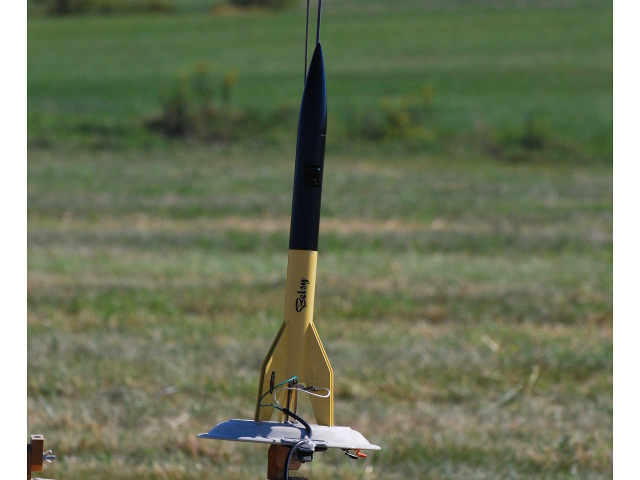 Last on the rack was my Betsy on a B6-4. I flew it with the gum-cam in hopes of getting my first aerial video, but I had a bad memory card in it and didn't get anything. I'll try again with a good card. The flight was lower than I'd prefer, with deployment a bit after apogee, but both sections were recovered in good shape. 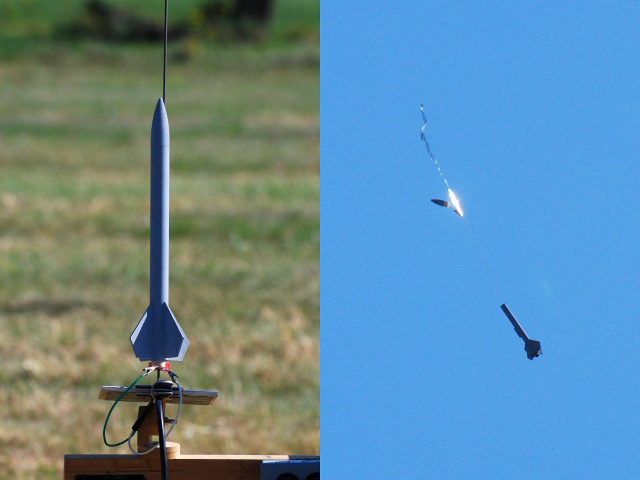 First to fly was Braydon's School Rocket on a C6-5. Braydon was very enthusiastic about Carter's flight in the second rack, and was only too happy to put the same engine in his rocket. Again, the flight was high with a modest southward arc, and recovery was good. 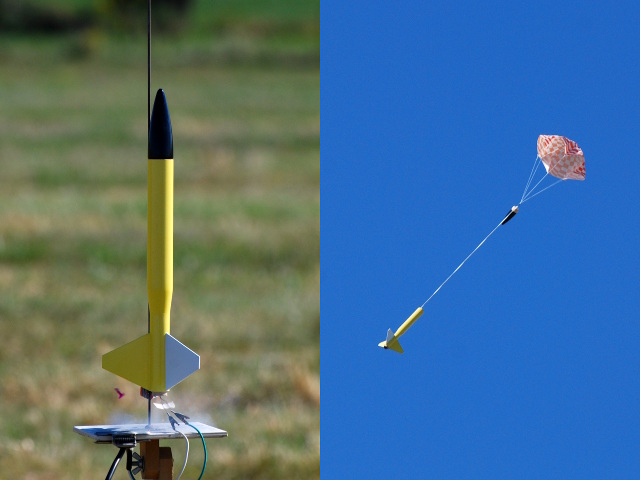 I flew my new FSI Sprint clone on a B6-4 next. The flight was good, reaching a moderate altitude nearly straight up, and recovery was also good just a little way from the stand. 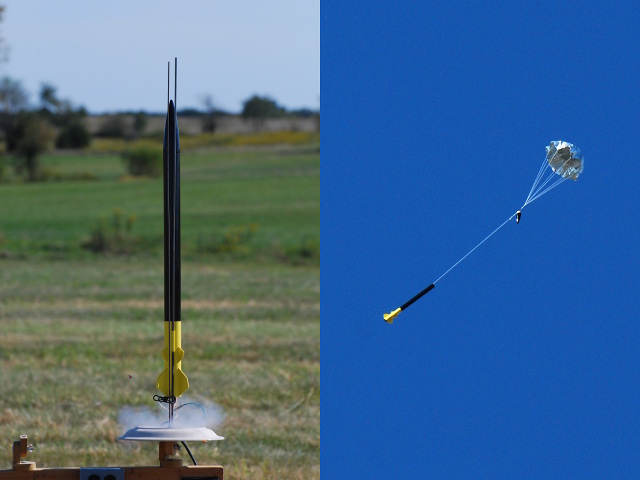 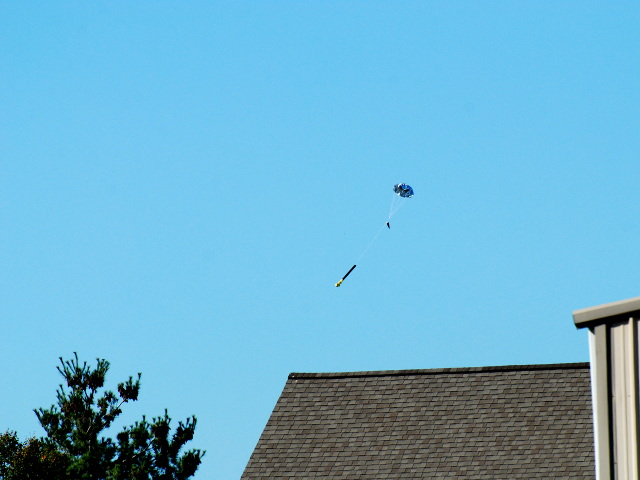 Last on the rack was my custom-designed Skylark on a pair of C6-5 engines. The simulation indicated a nearly perfect flight with deployment right at apogee, and that's what I witnessed; however, I had used a rather large parachute, and the rocket drifted north out of the field and into the landowner's front yard (missing three rooftops and a pond, to my relief). 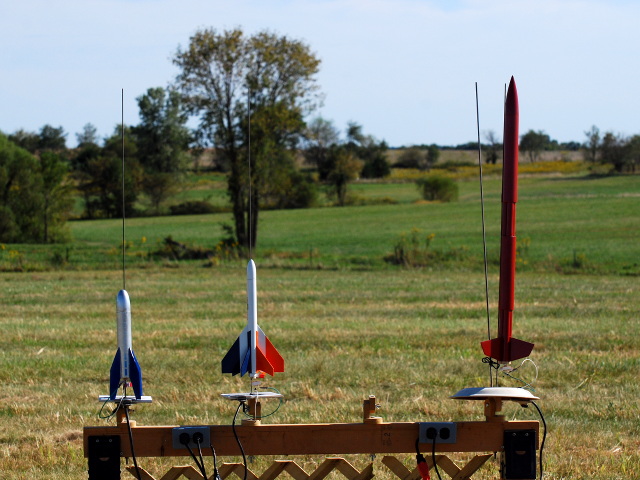 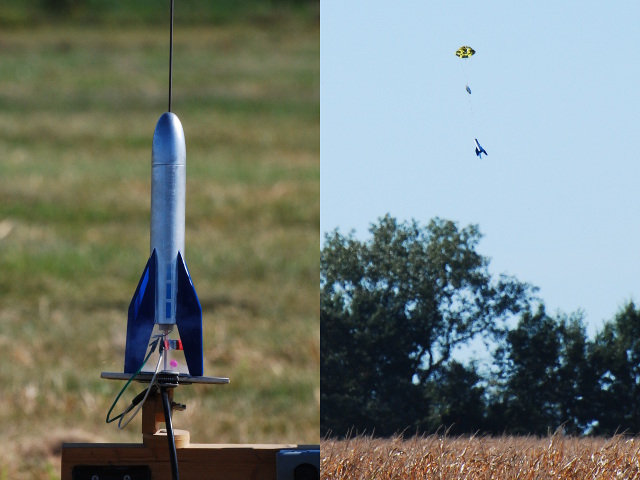 First to launch in the fourth rack was Carter's Baby Bertha on a C6-5. The flight was good, but the wind changed direction, causing the rocket to drift westward across the road; it landed just at the edge of the cornfield there, and for a while it appeared lost forever. A search near the end of the launch day finally recovered it, to the relief of its owner. 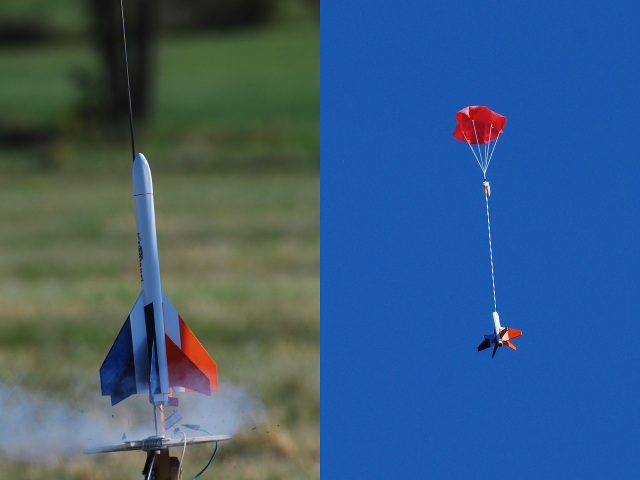 The second launch of this rack was my Lil' Centauri on C6-5. I had planned a B6-4, but at the last moment decided to rig the larger engine, and given the still-rather-low flight I witnessed, I'm glad I did it. Recovery was perfect just east of the stand. 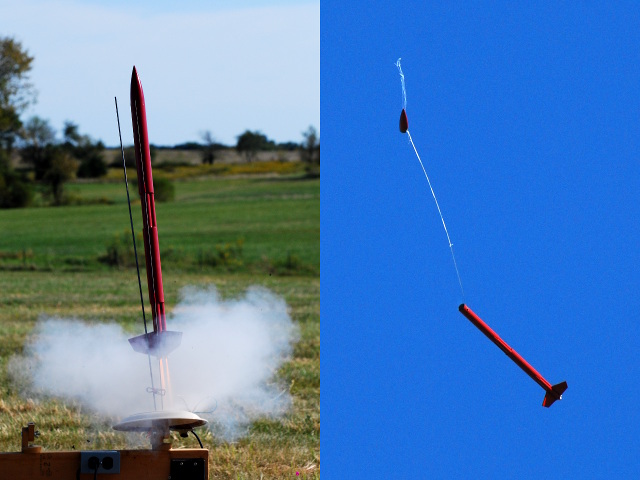 The final rocket of this group was my Baffler on a trio of C6-3 engines. The simulation says this rocket has no gentle deployments, and though I thought I had a good enough parachute on it, the chute was ripped from the shroud lines at deployment and the rocket returned on its side. One fin was cracked and an inch of body tube was zippered; it is being repaired and will fly again, probably on C6-5 engines as I think a late deployment might be better than an early one.

Owing to excess enthusiasm by the launch crew, we didn't get a picture of the fifth rack all together. 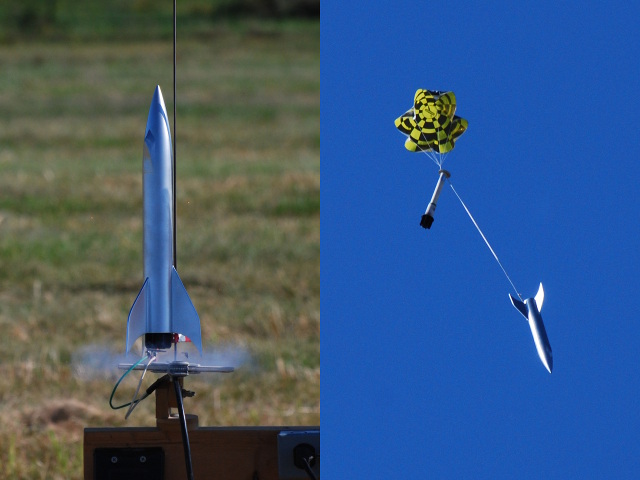 I started the fifth rack with my Dawn Star II on B6-4. It flew just as nicely as I had hoped, landing north of the stand in good condition. 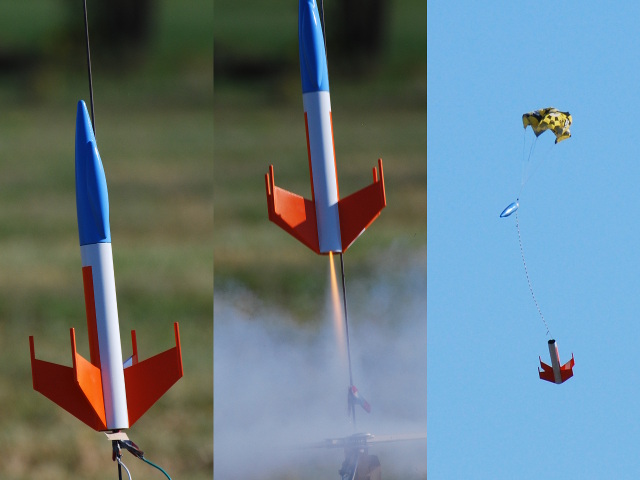 Next was my recently-repaired Sunward Star Watcher on a C6-5. It wagged a bit at launch, not unusual for a rocket with a heavy nose, but flew well and recovered fine northeast of the stand. 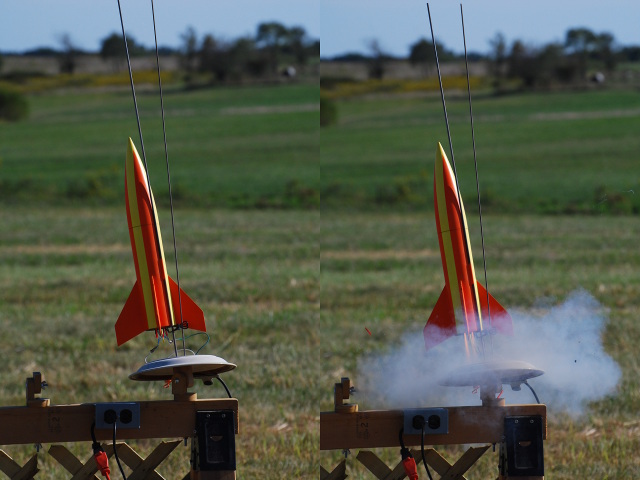 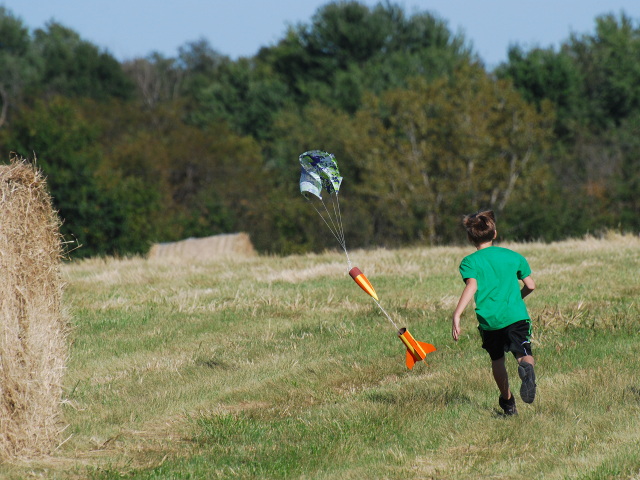 Carter Chasing Down the Big Daddy by Tracy Gonnerman

The last rocket to fly in this rack was my Big Daddy 4x18 on a pack and a third of C6-5 engines. This rocket has been totally refitted since its last flight, with a new laser-cut lower ring insert and screws holding the double Kevlar harness; I rigged about six feet of mason's line between the two harnesses, then looped the midpoint of that line through the nose cone loop then over the cone to secure it. I likewise looped the standard Estes chute through the eye of the cone, rather than using a snap-hook. The rocket took off with the usual authority, then deployed rather roughly, scorching the chute and tearing loose two shroud lines, but the rocket was still recovered without significant damage. Both Big Daddy and Baffler will be getting rip-resistant chutes before their next launches. 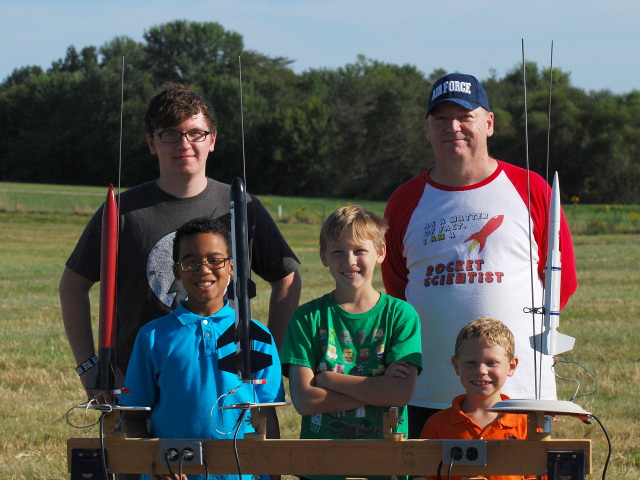 Here's the flight crew lined up behind the sixth and final rack. Front row, left to right: Landon, Carter, and Braydon. Back row, Tim and myself. 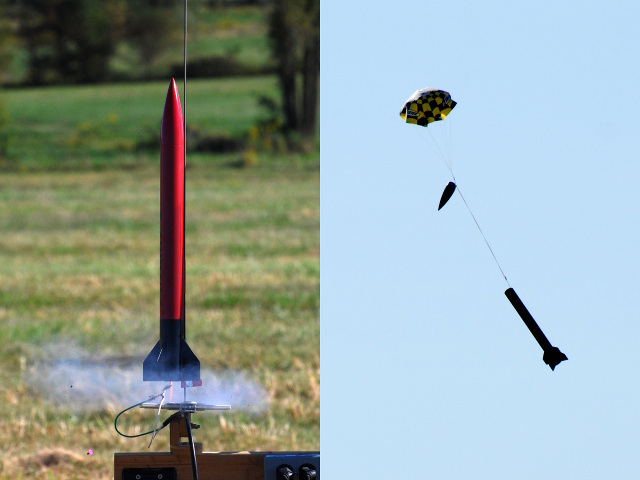 The last rack was all mine, starting with my Patriot X on a C6-5. The flight was good and the recovery likewise, though it drifted almost to the west edge of the field. 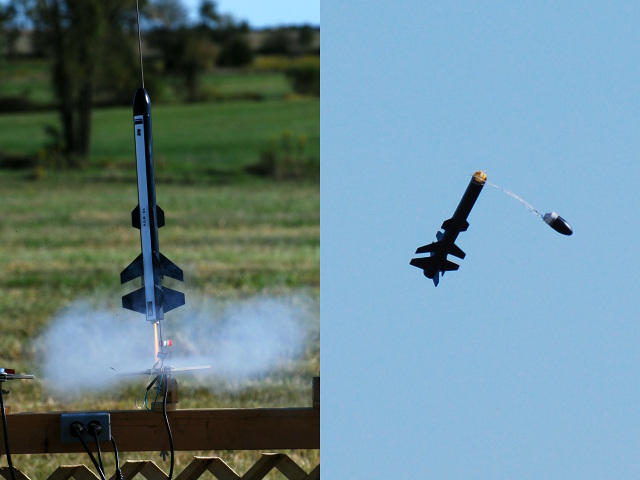 The next to last rocket of the day was my Quest Harpoon on a C6-3. The chute did not make it out of the body tube; I don't know if this was a failure of the ejection charge or if I had the wadding stuffed in too tight. Either way, it came down hard and broke one of the lower fins loose from the body tube. All parts were recovered and the rocket will be repaired and will fly again. 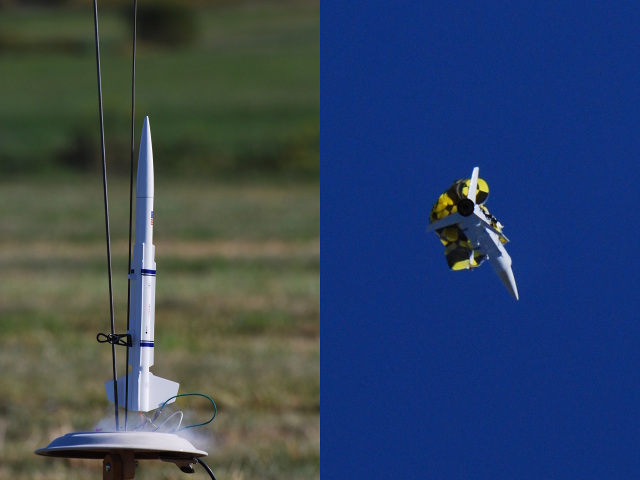 The last rocket of the day was my replacement Centuri Nomad clone on a B6-4. This rocket shares its nose cone with my previous Nomad clone, but that's it. The flight was good, but a couple of shroud lines tore loose from the chute and it hit the ground just northeast of the stand hard enough to break one fin loose, oddly the same damage the Harpoon suffered. It will be repaired and will fly again.

All in all it was a good launch day. It felt so good to get out in the sunshine with some friends of all ages and launch a few rockets... I can hardly wait until next time.