Dry, windy weather made it appear that we might have trouble setting up a launch for the 4-H project kids this year, but then suddenly after a brief spate of rain I saw that the forecast for Saturday the 9th was nearly windless. A quick flurry of Facebook messages later, and four of the five project kids (and their mothers and some of their siblings) were lined up to launch.

I took Tim, a friend of my daughter's, to assist with the launch as I did back in September, and as with that outing, he was very good help indeed; all the pictures in this post were taken by him. Sadly, my wife was unable to come, so there are no in-flight photos.

As with last year, please note that though this was officially a 4-H launch, not all of the kids who flew were 4-H members. 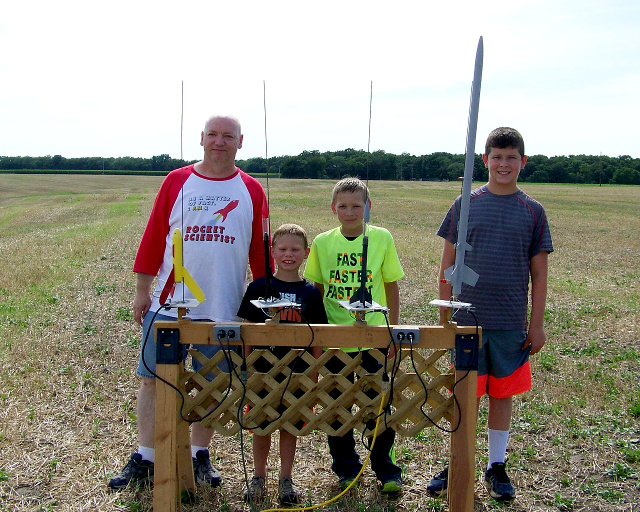 The Mo' Skeeter was launched on a B6-4, as usual, flying almost straight up and returning beautifully as always.

Braydon's Gamma Ray flew on an A6-4 to an unexpectedly high altitude, and recovered nicely as well.

Carter's Gamma Ray, flown on an A6-4 as well, went up nicely but separated at ejection. The parachute remained with the payload section, while the lower body fell free; however, no damage was noted. The separation happened at the knot between the Kevlar and elastic, where the elastic was cleanly broken... never saw that happen before.

Last to fly in the first rack was Clayton's Blue Bird Zero. He built it to accept up to E engines, but flew it using the 18mm-24mm adapter and a C6-5 engine. The flight was higher than I would have expected, arcing slightly into the breeze, and recovering fairly near the pad with no damage noted. 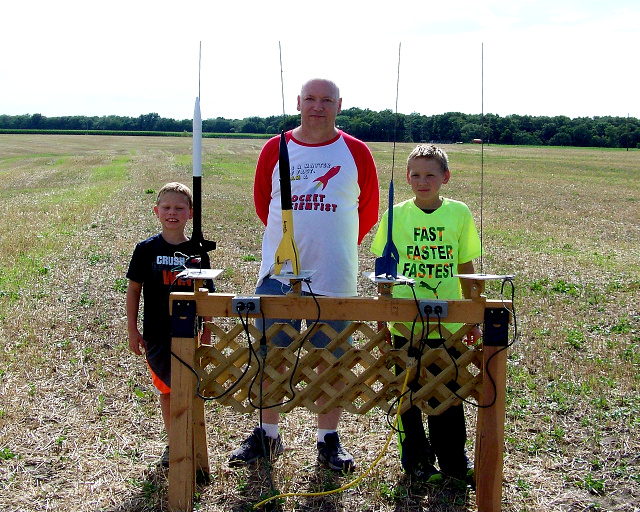 The second rack consisted of Braydon's Estes Phoenix Bird, my Betsy, and Carter's Estes Taser Twin. I had noticed some looseness in the rod attachment of the last position, so I decided not to use it again.

My Betsy flew next on a B6-4. Good flight, not as high as I expected (though I should have remembered from last time). I need to fly Betsy on a C6-5 next time. I flew it with the gum cam again, and again, got no video... this time it's not a bad memory card, as I later recorded until I ran down the battery (about 17 minutes) with no problem. But the in-flight video did not record at all; the card was empty. Well, have to try again next time.

Carter's Taser Twin flew last on a Quest B6-0 staged to an Estes A8-5. The flight was high, staging was good (with the sustainer kicking slightly out of line but still ascending nicely), altitude was high and the recovery was very, very slow on the 12" parachute he chose to recover it on. Landed in easy walking distance, though, thanks to the lack of wind. 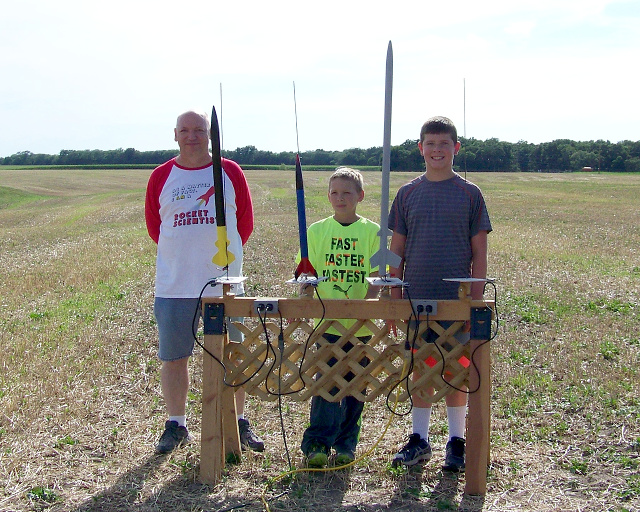 The third rack consisted of my Skylark, Carter's Estes Metalizer, and a second outing for Clayton's Blue Bird Zero.

My Skylark was supposed to fly on a pair of B6-4 engines, but it was not to be, as it failed to ignite. As per our usual procedure, we left it on the stand and moved on.

Carter's Metalizer flew next on a B6-4. He bought this one "outside the project" (which is cool with me) and asked if he could fly it; since we had a lot of extra time (with two of the kids not able to participate), I said sure. It turned in a nice flight to a modest altitude, and it "stuck" the landing (landed on its fins) very close to the stand.

Clayton's Blue Bird Zero was to be the last to fly, going up on another C6-5, but it got stuck on the rod. The metal clip that we used to support it on the rod caught on one of the engine hooks... it was my fault, and I gave him another engine to try again. 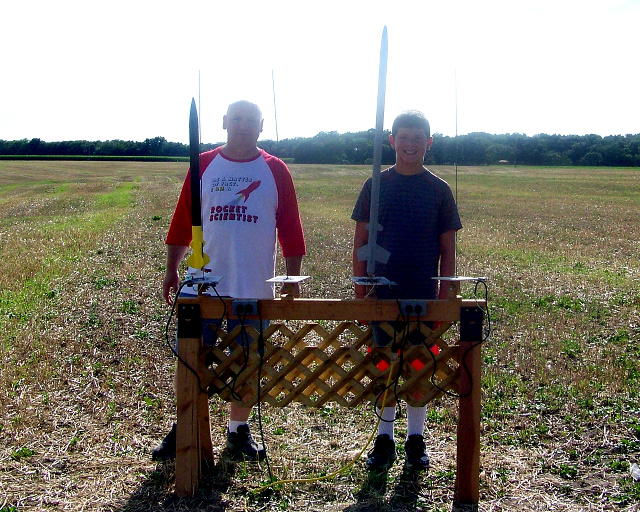 The fourth and final rack consisted of my Skylark and Clayton's Blue Bird Zero.

Once again, the Skylark would not ignite. I examined it before putting it back on the rod but I did not pull and reinstall the igniters, which is what I should have done. I decided to scrub my plans to launch this one at this time.

Clayton's BBZ was last to fly on a C6-5, and it turned in another pretty flight and was recovered near the stand with no damage noted.

It was a good day's flying, and I think everyone enjoyed it. I know I did.