This year I have four boys doing the rocketry project; as only one of them is actually doing it as a 4-H project, I'm not calling this a 4-H launch this time around. Scheduling conflicts prevented us from getting in any earlier launches, but that's fine... the weather was beautiful today, mid 80's and very little wind. 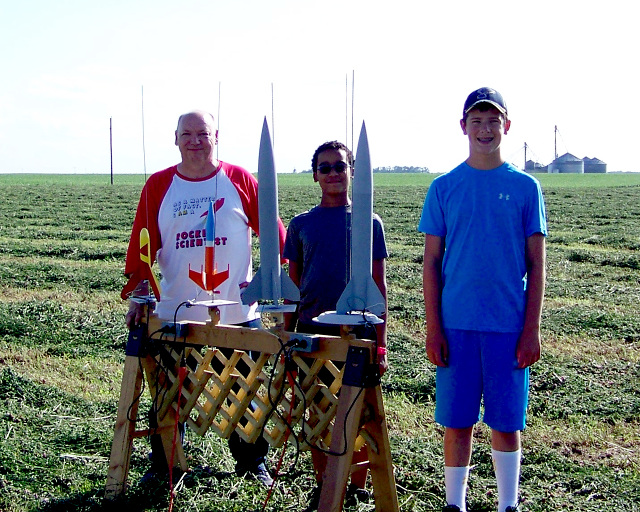 The Mo' Skeeter was launched on a B6-4, this time a Quest unit from the era when they came from Germany. It arced to the north slightly, then drifted on the gentle breeze past the stand quite a ways south of the launch stand. I reoriented the rest of the pads to try to avoid having any of them drift too far south, but this was only partially successful.

Next was my Sunward Star Watcher on a C6-5. This rocket has heavy nose weight, so I flew it on the bigger engine to make up for it, and it turned in a pretty flight. The recovery was less so, with the shroud lines of the parachute partially torn loose; this one needs a heavy duty parachute, so that's on the build list now. But despite that, the rocket was recovered in good shape.

Next to fly was Landon's BMS 3" School Rocket on a D12-3. This is one of those kits from Balsa Machining, and I strongly recommend it... it's an easy build, but not too easy, and very good quality, especially for such an inexpensive kit. Landon's rocket made a pretty ascent, arcing only slightly to the north and east, and recovered to the south and west of the stand in good shape.

Last on the rack was Clayton's BMS 3" School Rocket, also on a D12-3. I guess you can tell at this point that the boys all built the same kit this year. Anyway, it was a good flight and recovery, though there was a nose cone dent in the upper end of the body tube; Clayton's going to fix it up with an infusion of CA, on my recommendation. Easiest way to repair a minor dent like that is to stiffen it up with super glue. 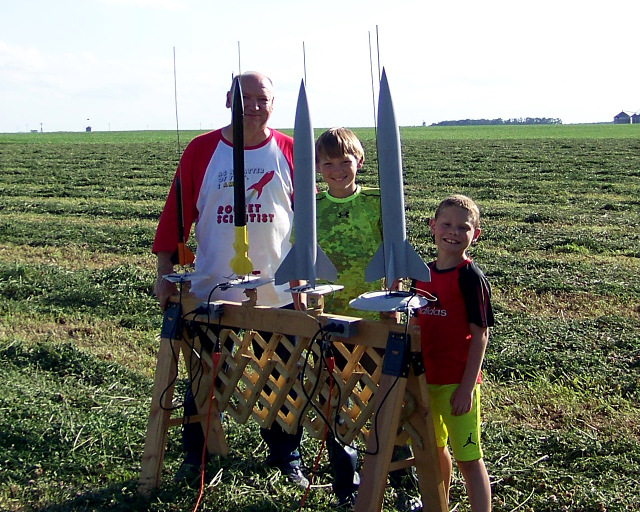 The BMS School Rocket launched first on a B6-4. It turned in a nice flight but drifted quite a long way south on the small nylon chute, landing in the middle of the two-lane highway bordering our field on the south! I watched three vehicles speed past, but none of them hit it, and it was recovered by Braydon (who really surprised me at how careful he was in doing so) with no damage evident.

So the next thing I did was to launch my Skylark on a pair of B6-4 engines, and it also flew well and then drifted almost to the highway, even though I had angled the pads a bit more. I should have taken it as a sign...

Carter launched his BMS 3" School Rocket next, on a D12-3, and it flew well and recovered just south of the stand.

Last to fly in the second rack was Braydon's BMS 3" School Rocket on a D12-3, and while it flew well, a slight change in the breeze caused it to land on the gravel drive behind us (to the east). There was damage evident on the fins, but it is entirely repairable. 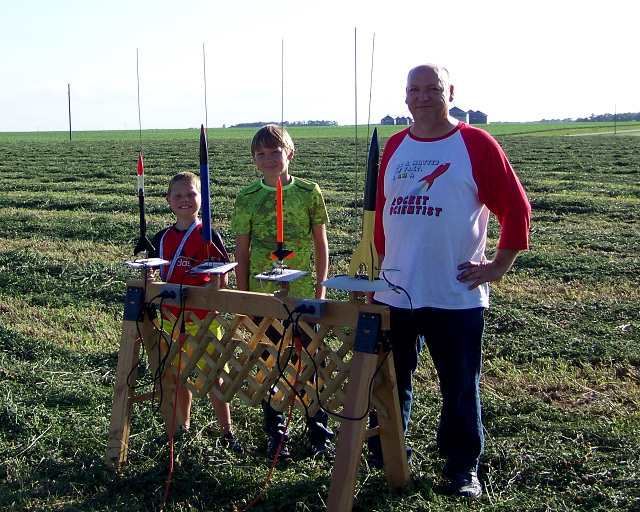 Braydon's Quest Gamma Ray flew first, on an A6-4. It went up nicely, but descended rather fast due to tangling of the shroud lines; however, the rocket appears undamaged and will fly again.

Carter's Metallizer went up next on a B6-4. It was a textbook flight and recovery, with no damage evident.

My Quest Sprint went up next on an A6-4. It was a quick flight, higher than expected, but the recovery was within the field and the rocket was undamaged.

Betsy flew last in the rack, on a B6-4, turning in a low, arcing flight that was rather unattractive. It deployed and recovered just fine, though, and for once the camera worked, capturing this unsatisfying video: 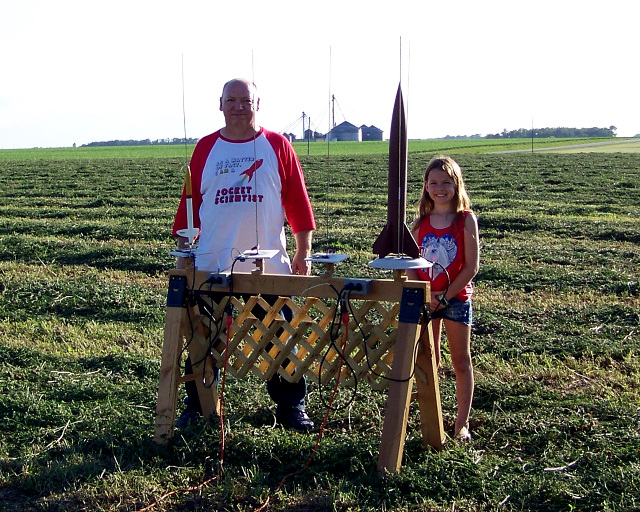 The last rack was a short one. We had expected Ethan to be joining us again this year, and so I had ordered him a kit; when he dropped out, Irelyn's mother grabbed the extra kit for her. She was a late arrival to the field today, so I set up the last rack just for her, and I figured, why not launch one of my own as well? So I prepped my old Estes Sprint and put it on the first position.

So the first to fly in the fourth rack was my Estes Sprint on a C6-7. When I built this rocket back in the old days, I was so proud of it I only flew it once. Since I refurbed it, I had launched it three more times, on A engines only. I decided it was time to really fly it like it was meant to be flown. Well, it went up beautifully... roughly 9 seconds upward, deploying a bit after apogee. It drifted, of course, across the road to the south and into a bean field. Sadly, I very much doubt I'll ever see it again. But as I tell the kids all the time, if you don't lose a few, you aren't flying them.

Finally we flew Irelyn's BMS 3" School Rocket on a D12-3. It was a perfect flight, up and then down with a perfect deployment and no damage to the rocket. I'm hoping she'll join us for the project next year, and build alongside the boys.

All in all, a good evening launching rockets. As we pulled out, I saw Carter taking one more stab at finding my Sprint. While I knew it was hopeless I had to appreciate the optimism, and the thoughtfulness as well.