It's been two years and one day since our last launch; I had kids doing rocketry projects in 2018, but we were unable to schedule a launch. Two weeks ago we tried to have a launch, but were rained out; we could only find one other day, i.e. today, when everyone thought they could make it.

Of course, today three of the kids were unable to attend. We went ahead, as one of the kids who did make it had never flown before. Boy, was he in for an experience.

Temperatures were in the lower 80's, quite nice, but there was more breeze than I prefer. I tried to set up the launch stand to compensate, but it took me a few tries to get it right, as you will see. 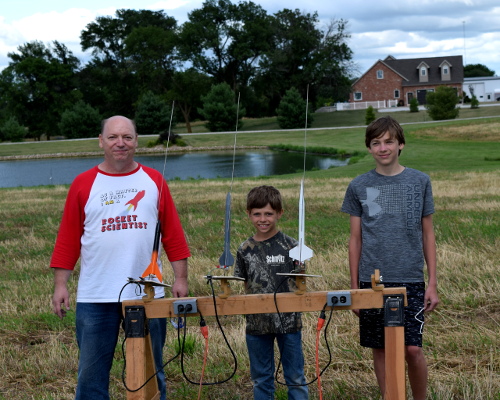 Normally, I fly my Mo' Skeeter as a wind tester, but I managed to break off a fin loading it into the truck; so, I put my 38-year-old Estes Alpha on the rack in first position to do that duty. Second was Jonathan's BMS School Rocket, and in the third position was Carter's Estes Crossfire ISV. We had malfunction (the threaded insert came out) preventing us from using the fourth position. 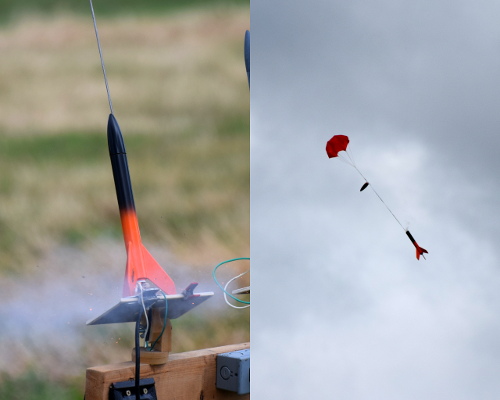 The Estes Alpha was launched first, on a Quest A6-4 (the newer Chinese-made engine). The rocket arced into the wind, ejected its parachute on the way down and drifted uncomfortably close to the pond. It was recovered without damage, however. 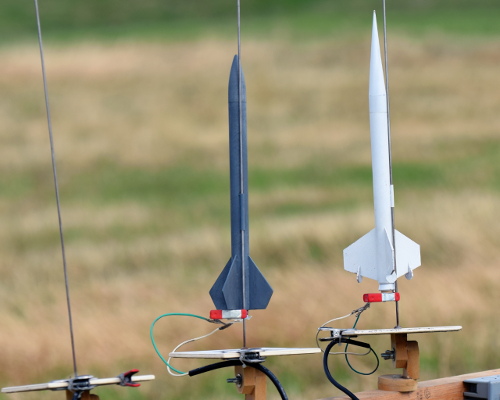 School Rocket on the Launch Stand

Next to fly was Jonathan's BMS School Rocket on an older German-made Quest A6-4. I adjusted the launch stand, trying to compensate for the behavior I had seen from my Alpha, but this rocket went higher than I expected and arced directly into the pond. 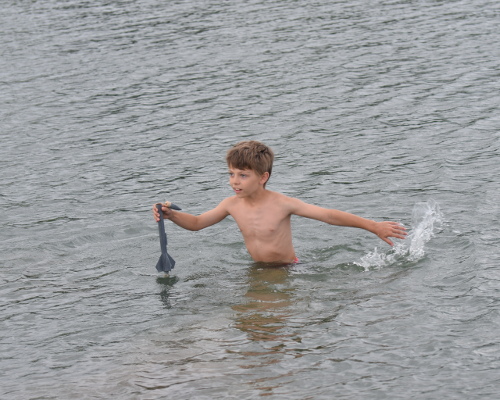 We all agreed it had not deployed, but when we got to the side of the pond we could see the nose cone was out. Jonathan decided to go in and recover it; the pond is one used for swimming, and so was fit for him to wade into. I was absolutely shocked to discover that the rocket, despite being full of water, appeared basically undamaged. It appeared that the streamer had stuck in the tube, though I could see no reason why. I carefully removed the engine casing, pushed out the wadding with a dowel I usually use to push it in, and counseled Jonathan to let it dry thoroughly with the nose cone out. I honestly think it will be fine... I've never had an Estes rocket survive that kind of treatment. 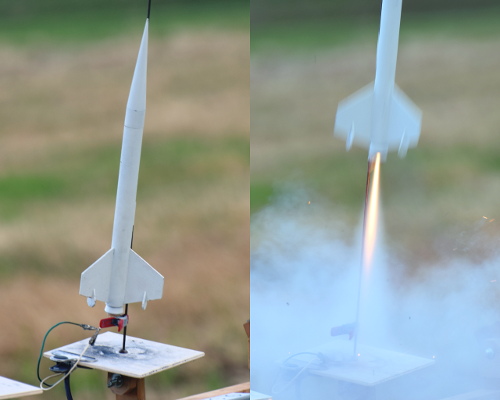 Last on the rack was Carter's Estes Crossfire ISV, flying on an Estes A8-3. I reoriented the launch stand one more time, and evidently this time I got it right... in the future, I guess I need to launch more testers. It launched very nicely, flying almost straight up, but deployment was another story.

You see, the Crossfire's chute got tangled up around the fins. The shock cord was very twisted, in fact. It fell, its chute visible but not really open, then opened fully about twenty feet from the ground. Carter was very happy to recover it in good order. 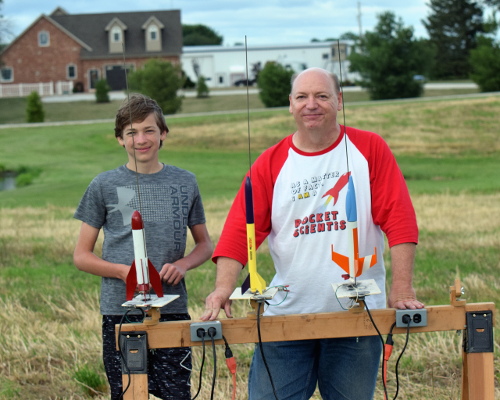 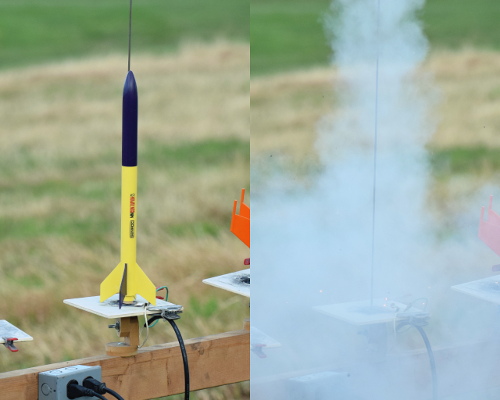 We tried to launch Carter's rocket first, but could not get ignition, so I moved on to the second position, launching my Semroc Mini Centurion on an A8-3. 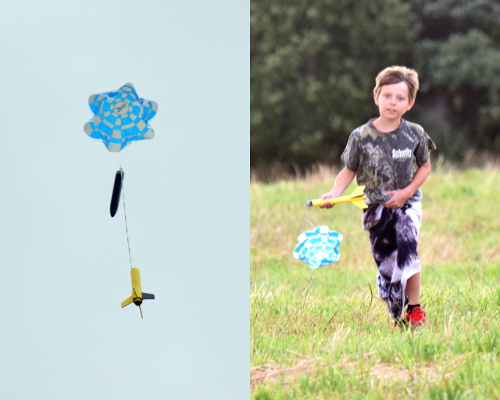 It was a good flight, reasonably straight, and Jonathan recovered it not too far from the launch stand. While I was awaiting his return, I cleaned the clips on the number one position; we tried again to launch Carter's rocket, again with no luck. 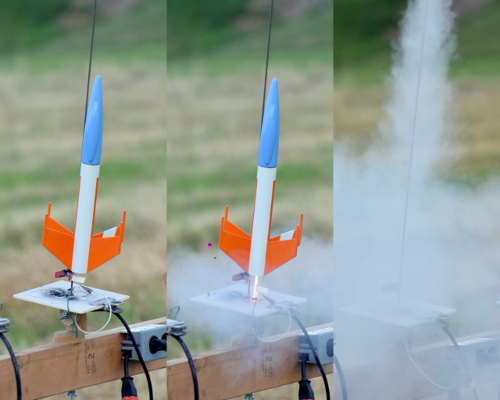 So we moved on to my Sunward Star Watcher, flying on an Estes C6-5. Yes, despite the wind I went all in. The flight was high and fast, and arced to the south, across the highway, just as my vintage Estes Sprint had the year before. But unlike the Sprint, I didn't lose it; as soon as it deployed its parachute, it began to return downwind, back across the road. It landed in our field, quite some distance from the stand, but safe and sound. 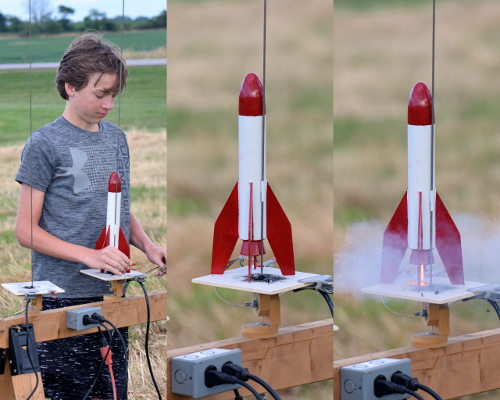 Having tried twice to launch Carter's rocket from position 1, I told him to just move it to the second position, and it did, finally, launch. The flight was good, low but straight, with limited drift, and the rocket was recovered in good condition.

We had several issues with ignition that I didn't list above; given that, and the windy weather conditions, we decided to call it a day at this point. Other than Jonathan's rocket going in the pond, we had no other rockets lost or damaged, and as I believe his rocket will fly again (and probably even come out looking pretty good), I'm calling this launch a success.