I was asked to be a 4-H leader once again, for the first time since the pandemic, and today I had a brief launch with the one member in the program this time. We launched on a field belonging to the member's family, situated on a broad ridgeline. The sky was rather cloudy but visibility was good, and the wind laid almost completely by the time we were ready to launch. 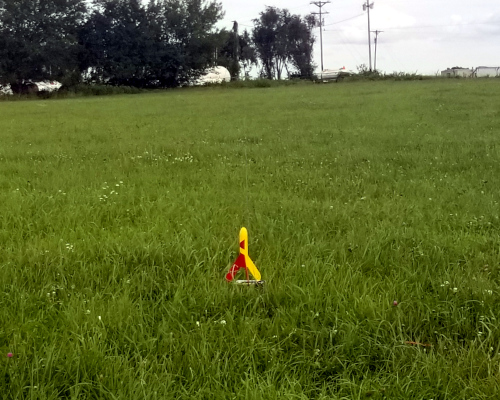 Mo' Skeeter On The Stand

The first flight was my Mo' Skeeter, flying on a B6-4 as usual for a wind test. It was a very straight flight, high for this rocket, and the recovery was perfect about 50 yards from the stand.

I honestly forgot to take pictures of the member's rockets, but as we were flying them in primer there wouldn't have been much to see.

The second flight was the member's Quest Flash on an A6-4, one of the last of the German-made engines in my collection. It was a nice high flight, arcing slightly to the south and recovering about a hundred yards away but still within the field. I adjusted the stand tilt a bit toward the north before moving on to the third and last flight.

The third flight was the member's Estes Phoenix Bird on a B6-4. It turned in a nice flight, reasonably straight with a good recovery inside the field.

County Fair judging for his rockets is in two days so we did not do any more flying; the member still had paint to put on the rocket, and limited time to do it in so it could be dry in time to show. We always try not to end up doing these things at the last moment, but we only succeed sometimes.