A couple of weeks ago my daughter pointed out to me that the Fairfax Society of Rocketry, located near Cedar Rapids, Iowa, was planning a launch called the Hocus Pocus Rocket Launch. I looked into it on Facebook and found that they were inviting basically anyone and everyone, and so I decided to take them up on it. Today was that launch, and it was a good one. I forget if there were two or three Level One certification launches, but it was exciting to see high powered rockets in person.

The weather was unseasonably warm, in the 70's in the morning, but somewhat windy, 11 MPH or maybe a bit more. As I was launching only low power rockets on a field with a 5,000 foot waiver, I figured I could recover them within the field with some cautious choices. 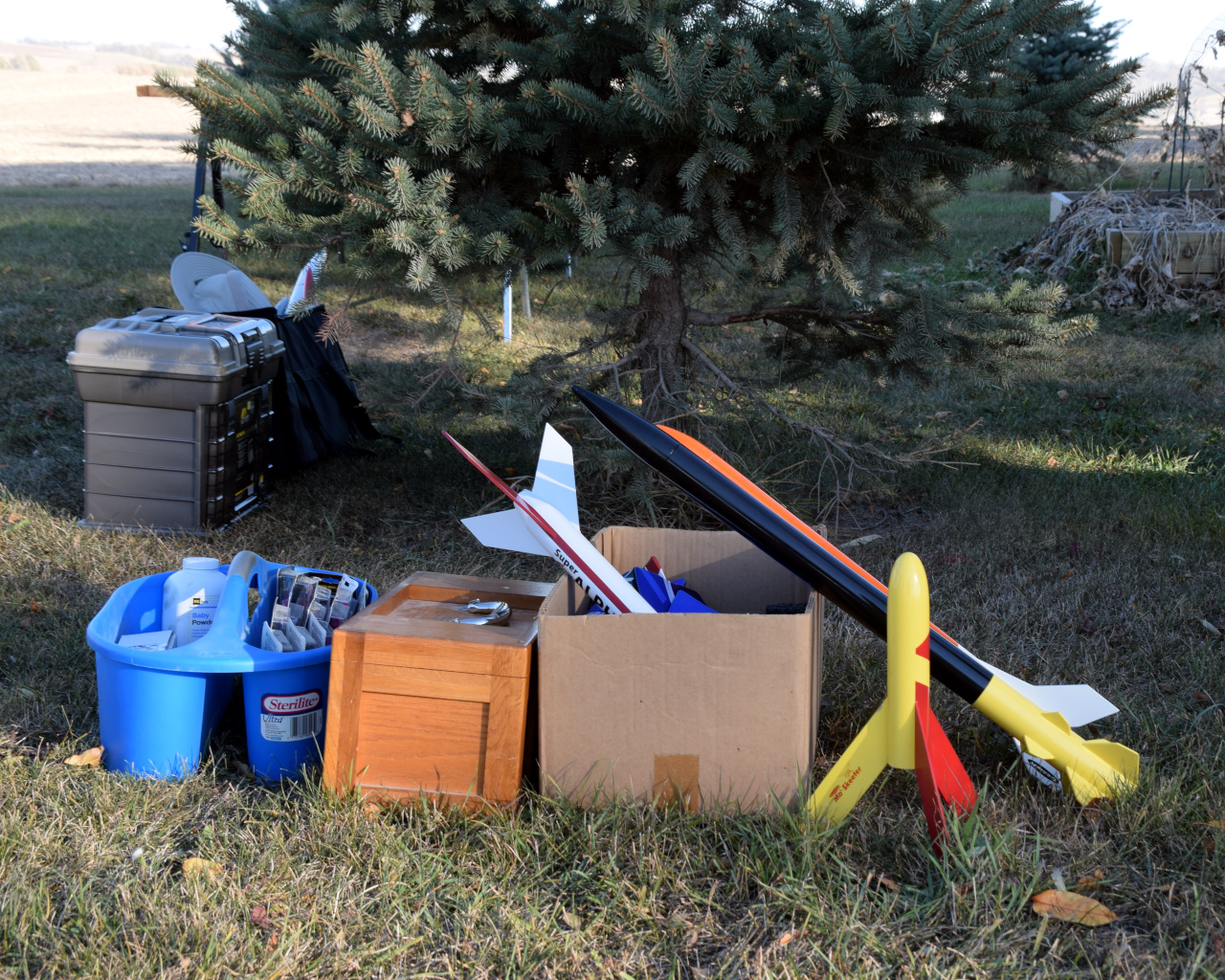 What I Took With Me

Note: All photography courtesy of my wife, Tracy Gonnerman. More of her pictures, including some photos of rockets belonging to other rocketeers at the launch, will appear in the Fairfax Society of Rocketry group on Facebook soon.

Even better, though, was getting to launch some of my own low power rockets. I took eight rockets to fly, and I had eight flights, but it wasn't as straightforward as it sounds. Here's how it went down for me:

The event was set to start at 9:00am, but things weren't fully set up when we arrived; I pitched in as much as I could, but not being familiar with their equipment I'm afraid I wasn't that much help. Actual flying started about 10:00am.

I started with my Mo' Skeeter, as usual, flying on a B6-4. I flew off the first position on the stand in the first round of flights... first flight of the day. 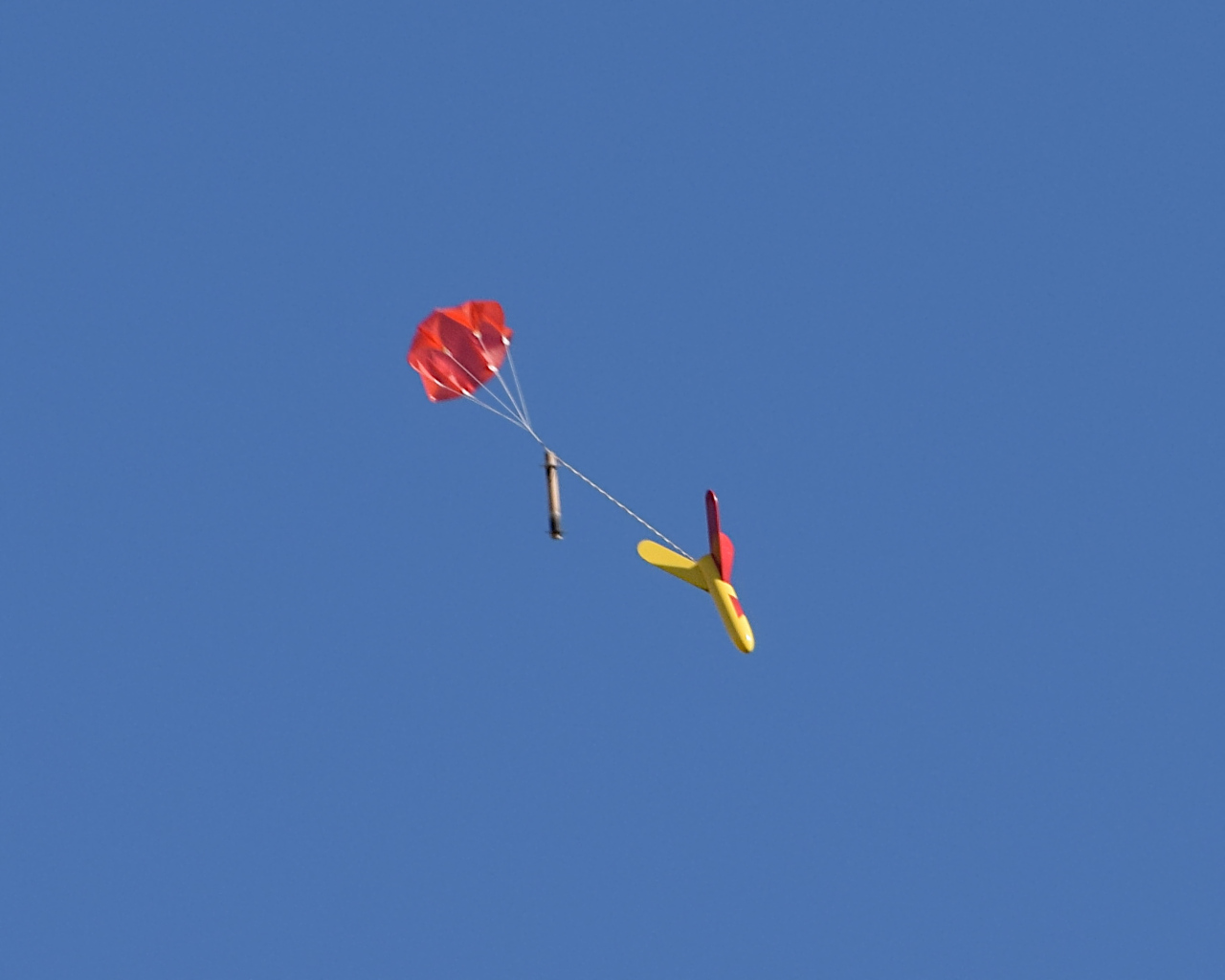 Mo' Skeeter turned in another beautiful flight, but drifted a good distance out into the field due to the wind being kind of stiff. Warned that the wind would continue to rise throughout the day, I decided to push forward and get all my launches in before noon. 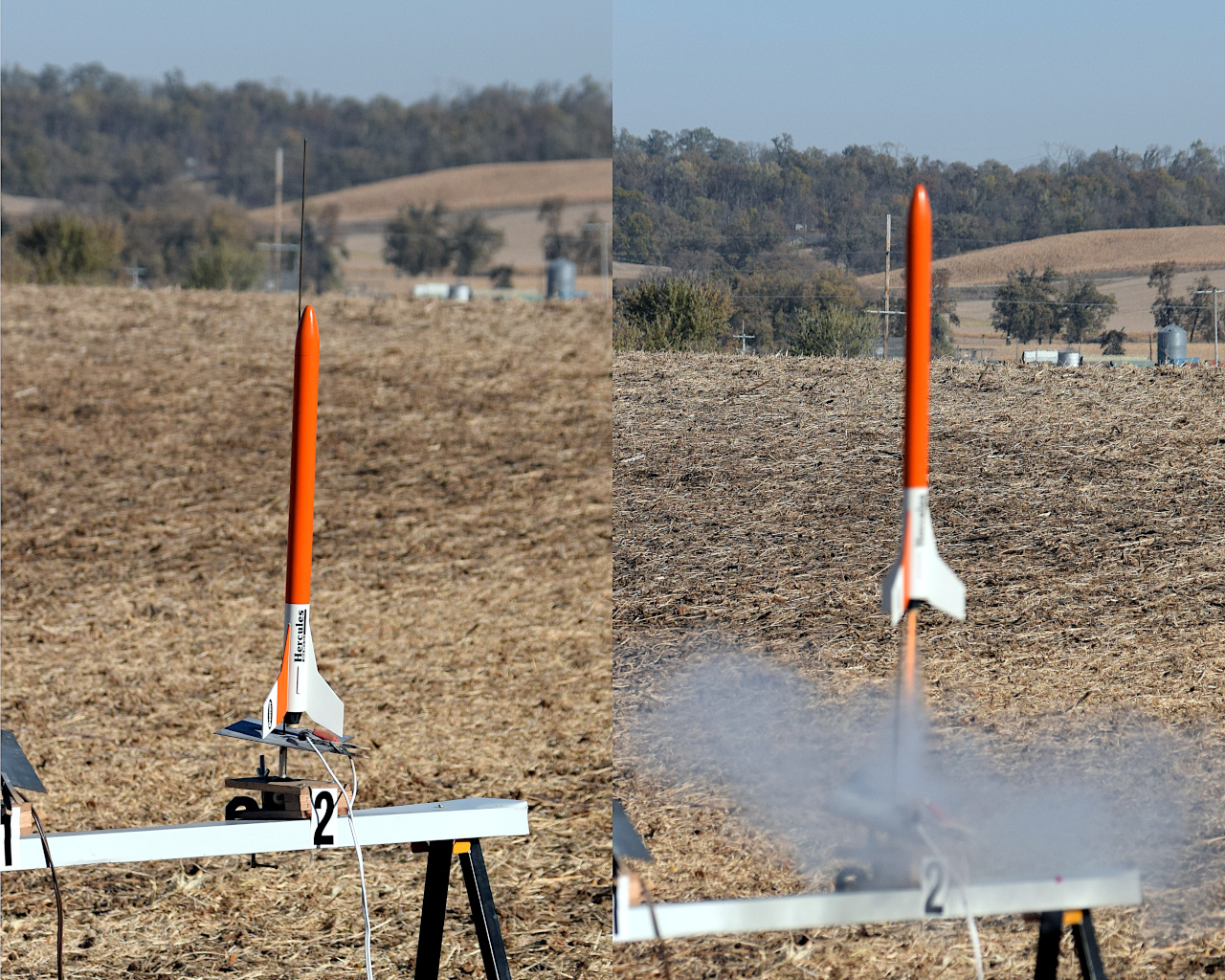 My second flight was my Hercules, flying on a B6-2, which prior experience has shown is a good choice for this rocket. Forewarned by the long drifting return of Mo' Skeeter on its standard Estes plastic chute, I elected to use my handful of smaller 9" fabric parachutes for all subsequent launches. This turned out to be a good idea, and the field was soft enought to provide for gentle landings for my rockets.

The Hercules weathercocked rather heavily back over the spectators, ejected just fine and still managed to drift out into the field. The flight was low and not particularly exciting, so…

My third flight was my Hercules, flying on a C6-5 this time. The organizer, Reggie Morrow, announced that it was "returning to the scene of the crime." I tipped the rod back into the wind a bit, which turned out to be a mistake, but a small one; it flew higher, but still weathercocked back over the specators, and then it drifted into a small tree. It was just a bit out of reach, hanging over the back of a parked pickup truck, so after seeking permission I climbed up on the bumper of the truck and pulled it down.

After these two flights, the Hercules had a few new battle scars including a bit of tree-rash on the trailing edge of a fin and a body tube dent in the nose cone. Still looks good, though, and will definitely fly again. 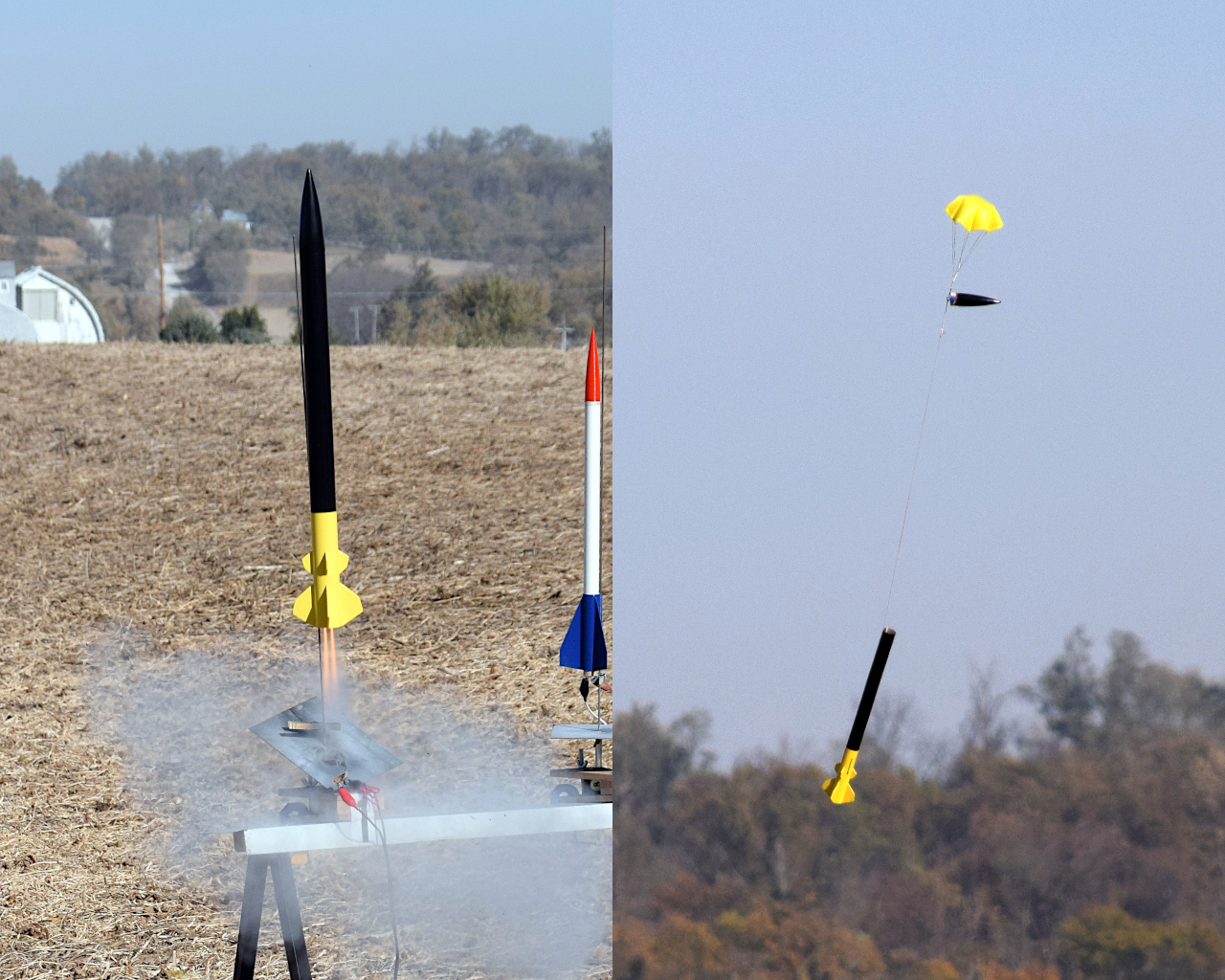 Feeling a bit more adventurous, and also being a bit more comfortable with their launch equipment, I pulled out my Skylark and put in a pair of B6-4 engines. I was concerned that one igniter plug might not be holding on well enough, but the cluster ignited perfectly and the rocket recovered inside the field (in fact, not that far from the stand, all things considered).

I'll note at this point that, except for the Mo' Skeeter launch, all the rockets I launched today were rigged with small fabric parachutes. One came from BMS, and I honestly do not remember where the others came from, but they are somewhere around 8 inches across. I risked damaging the rockets due to the faster descent, but after the long walk I had to recover the Mo' Skeeter I really wanted to keep them close to the launch stand. 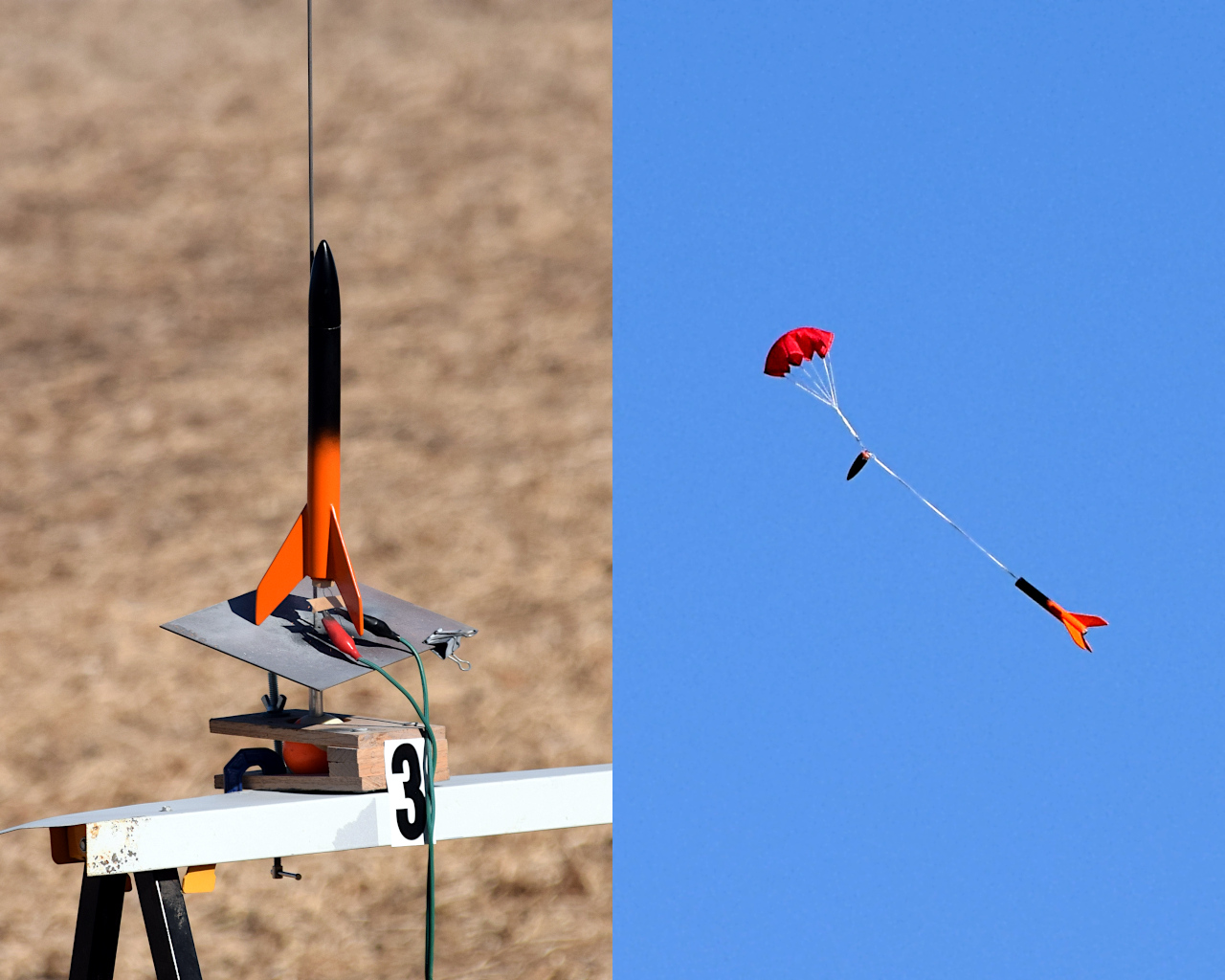 My next launch was my vintage, forty-year-old Estes Alpha, flying on a B6-4. It was a good, nearly straight trip up, but that resulted in a long drift despite the small chute; it went as far from the stand as the Mo' Skeeter did earlier. The Alpha was recovered undamaged and ready for another round. 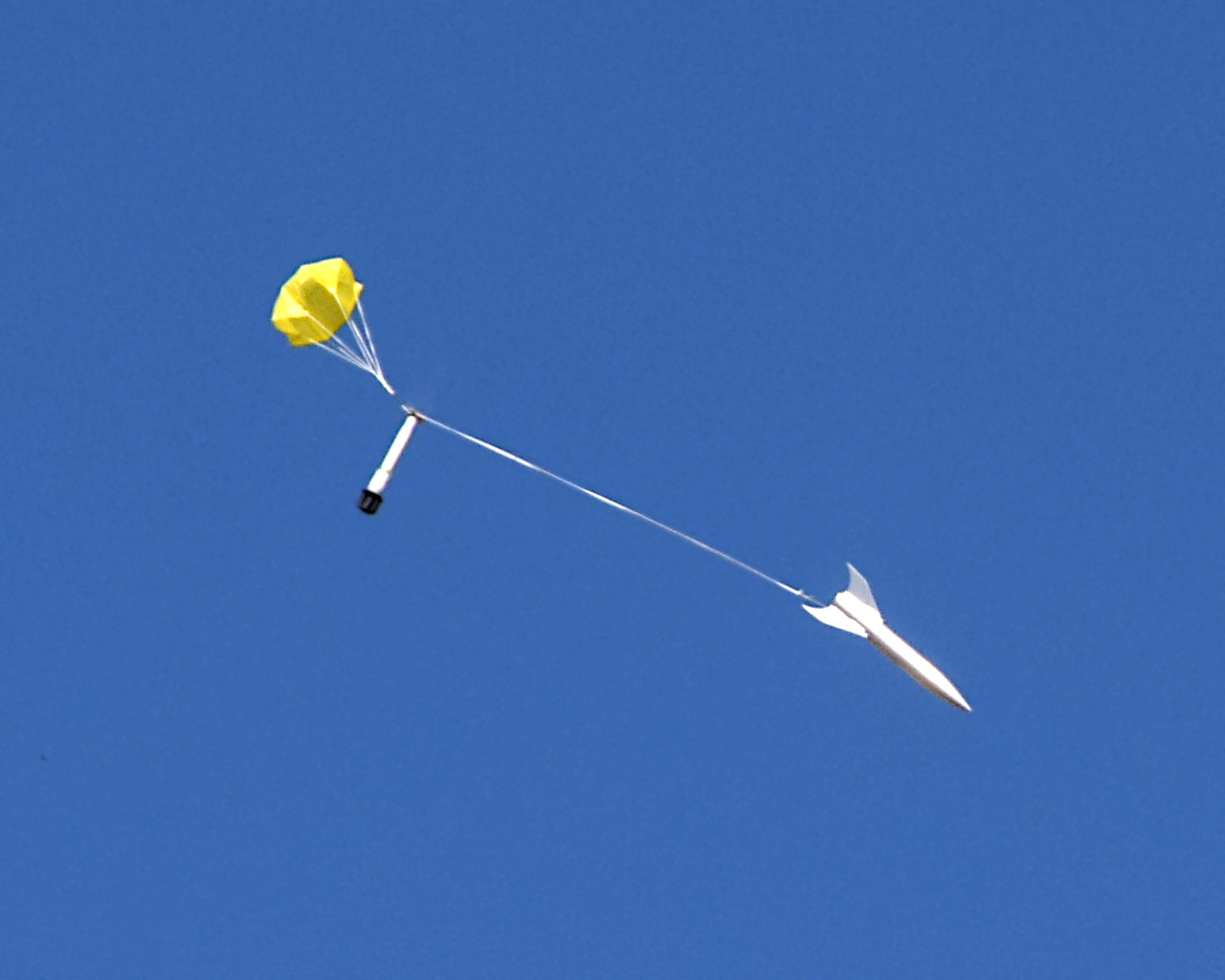 Getting a little more gutsy, I next put my Dawn Star II on the rack, loaded with a B6-4. I had never rigged it with one of the fabric chutes, which are a bit thicker than the plastic chutes I normally use with my core ejectors, but it worked fine; the rocket arced a bit over the crowd, deployed its chute on schedule and landed just over the rise in the middle of the field. Given the hard-to-see metallic paint job the Dawn Star II is dressed in, I was glad I'd put a brightly-colored chute in it. 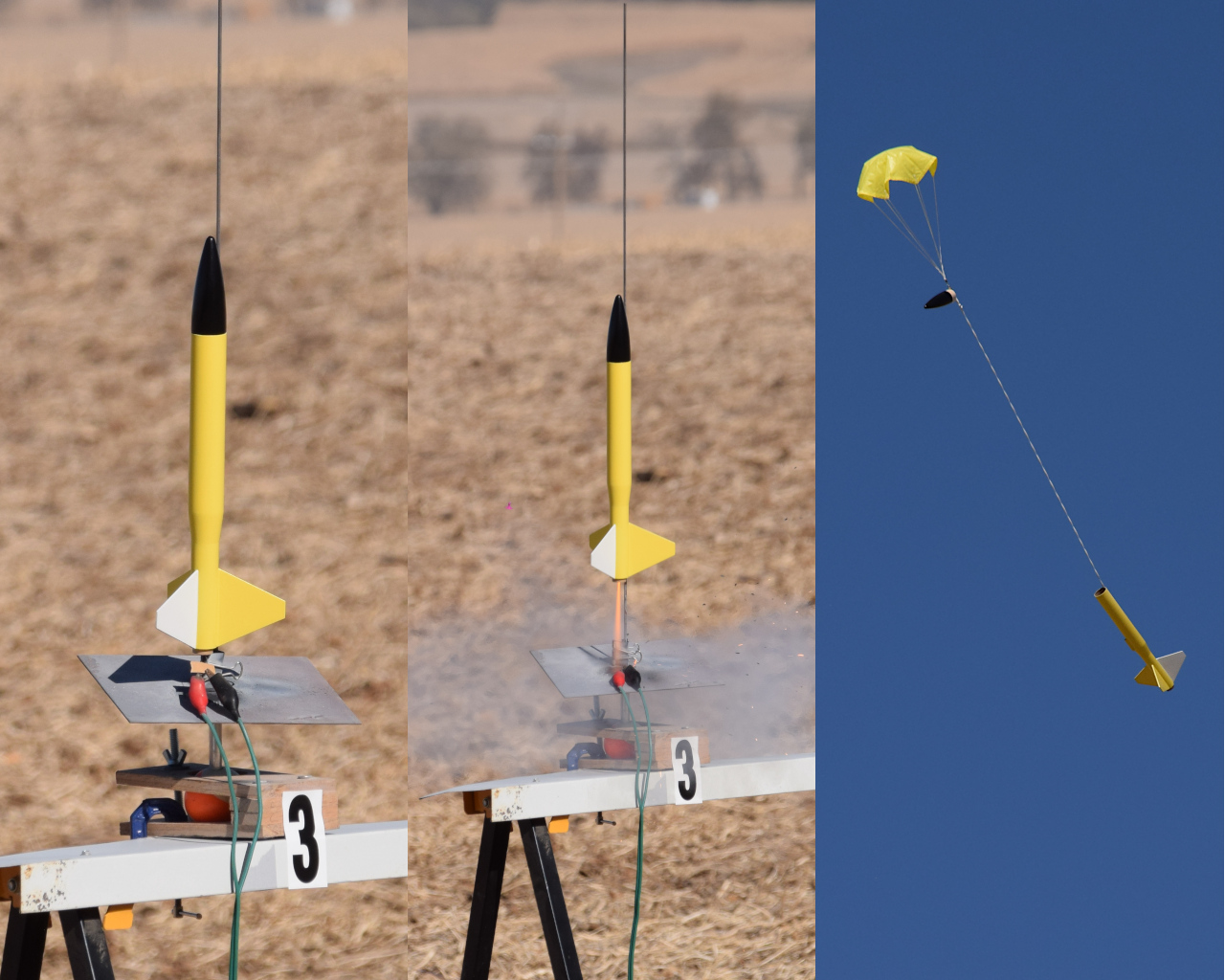 Feeling a bit bolder yet, and seeing a slight drop in the wind, I loaded up my FSI Sprint clone with a B6-4. It was a nice flight, straighter than most for the day, with good deployment and a landing where I could still see it from the stand area.

It was my intention to fly my Estes Super Alpha 18tc next on a B6-4, but I forgot I had never fitted it with a shock cord mount. So, I had to skip it. 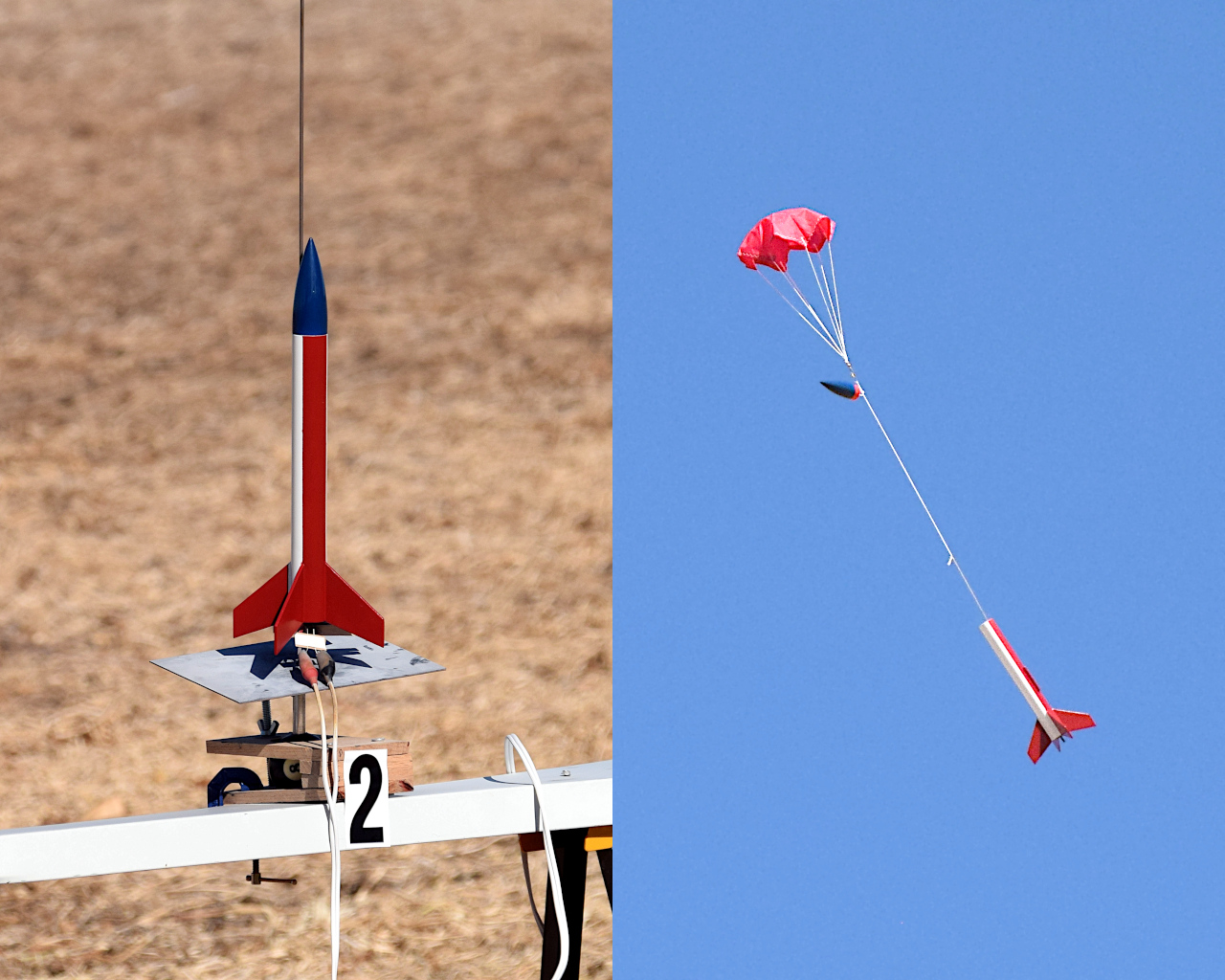 This made my last flight of the day my as-yet-unflown Quest America, fitted with a B6-4. It was a good flight, arcing to the south (over the spectators) before drifting back to the north, out into the field. With help from my wife we tracked it down and brought it back undamaged.

With this task completed, I decided my day of launching was done. I packed up my rockets and equipment, said some goodbyes, and rolled out of the driveway at 12:04 pm. If the wind had been substantially less I would have paced myself, loaded up more C6-5 engines, and flown most of my rockets at least twice, but I did not have the confidence to risk them in the strengthening winds.

I'd like to thank Reggie Morrow and all the members of the Fairfax Society of Rocketry for the invitation! I've really missed being able to launch my rockets; here's hoping I can arrange to do this more.