Gary Aguiar asked me for some more details of the controller I built. I may try to get a close-up picture of its internals on the website at some time or other, but here are the salient details:

I followed my schematic below in general. Rather than one resistor, I used one per LED (so that arming multiple circuits doesn't cause the lights to become dim), and I connected them to the "hot" side of the safety interlock rather than the "cold" side (so that arming a stand will light the attendant continuity LED if continuity is available). This latter change lets me keep the key in my hand while at the pad, but I can have Justin arm the pads to check for continuity. The key is, of course, required for launching.

I used 820 Ohm resistors, standard yellow LEDs, and toggle switches all purchased from Futurlec.com. They are slow fulfilling orders, but they are undeniably cheap. I paid all of $0.85 each for the toggle switches, for example. All the internal wire is automotive, mostly 16 gauge, except for the wires leading to the LEDs; they don't have to be heavy since they only carry about 20 milliamps or so (I forget exactly what I figured the current was, but it's about that). Likewise, the spade and ring terminals are automotive, being cheapos from Wal-Mart (also a few crimp-on disconnects are in there, from the same source, connecting the battery and switches). There is some wire scavenged from UPS systems, but it's all comparable to the automotive wire. Oh, and the power diodes are "MUR1520G 15A 200V Ultrafast Diode" units, also from Futurlec.com; I downloaded the datasheets, identified which leg was the same as the screw-hole, and cut it off. I'm nobody's excuse for a soldering expert, but I was able to do an adequate job attaching the remaining leg of each to a wire lead.

The box itself is made of luaun, reinforced with lattice strips; the bottom is a 5/8" thick piece of chipboard. As shown in the pictures, I have primed and sanded it a couple of times, then gave up on fine finishing and just assembled it... I may at some time paint it properly, though that would involved dismantling the top panel. The top panel is luaun, but it was too thin to put screws into, so I layered pieces of lattice board inside it where necessary to thicken it up.

The safety interlock "mechanism" is just a couple of strips of computer case metal, cut with a nibbler tool and bent by hand. I bought a momentary switch (a button) from Futurelec.com, but it was cheaply made and melted when I soldered the wires to it. So, I took apart an old computer power switch and removed the small wire that holds it in the "on" position; this made it into a momentary switch. The button on top is just a rubber cap I dug out of the junk box, glued to the top of a short piece of half-inch dowel which I carefully drilled to slip over the stub of the power switch. The metallic grommet visible under the switch is all that remains of the Futurelec button.

Much hard thinking about my launch stand and launch controller led me to decide to combine them into a complete launch system. The pictures to the right tell the story.

First, let me say that I am the first to complain when someone uses standard 120 V AC compatible plugs and outlets on a launch stand. It does present some risk. However, getting enough 16 gauge wire to the stand was just plain cheaper using heavy-duty extension cords than by any other method. 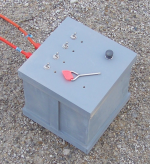 I did what I could to mitigate the risk. First, the outlet on the launch controller is wired such that the "safety ground" is in fact the "ground" of the controller... that is, the negative terminal of the battery inside is connected directly to the green screw on the outlet. This makes the "hot" and "neutral" terminals all positive, so any 120 V AC device plugged in should not receive any current (assuming there isn't a short to ground in the device, but in that case it's the device that has a problem, and plugging it in to a regular 120 V AC outlet would be, if anything, even worse).

Next, the igniter leads. Note the colors of the wires attached to the clips... white and green, "neutral" and "safety ground." Plugged in to a properly wired outlet, there will be no voltage at the clips. Of course, a mis-wired outlet might still lead to a clip being "hot," but I don't think I can do anything to mitigate that situation.

So anyway... I got out an old roll of fine nichrome wire, the sort that was falling into disuse in 1974 when I got into rocketry in the first place, and cut some short pieces. Justin and I tested each igniter lead and sub-circuit, culminating in a simultaneous ignition of two circuits. We also tested the four batteries I scrounged from old UPS units, confirming one as bad, one as acceptable and two as really good. 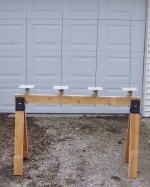 It's done! Today I took five pieces of 2x6 lumber scrap, ripped them down to 2x4, then cut the four leg pieces to 30" length. The top board happened to be just under 53" long, and I left it that length; with a bit more than 5" on each end to hold the leg brackets, I was able to space the tilt and swivels 14" apart.

The brackets are screwed to the top board on one side only, allowing the sawhorse to fold flat. I plan to hang it on the wall of my garage for storage... probably as soon as I post this web page. 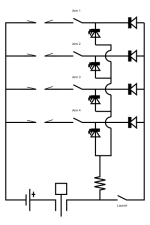 I'm still thinking about it. I've determined that, to get working continuity lights, I need diodes to prevent "crossover." The diagram at right (click it for a large view) shows the circuit. If you look carefully, you'll see that removing the diodes will cause all four continuity lights to light if you arm any single circuit having continuity.

Now I need diodes that can handle 8 to 10 amps DC at 12 volts. I can find such online, but finding a reasonably-priced source is still eluding me... 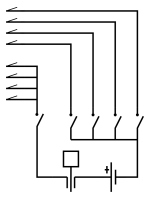 After a lot of hard thinking, I've abandoned the idea of building a relay controller. I'm going with a simple direct-drive design, as shown in the diagram at right. The diagram omits the arming and continuity LEDs; I'm going to connect a single resistor to the safety key, hot only when the key is in of course, with LEDs wired to show arming and continuity for all four stands.

My main consideration at this point is wire. I'm thinking 14 or 16 gauge lamp-type cord, two runs of 30', plus a single return run of 14 gauge automotive wire, all bundled neatly with zip ties. Still considering my options, though.

Today I cut, drilled, and assembled the remaining three tilt and swivel assemblies for my launch stand. The picture at right will, hopefully, make my rod attachment much clearer than my fumbled words in the post below. The screw at the lower end of the launch rod will pass through a hole in the ceramic tile blast deflector, then screw into a tap glued into a hole atop the tilt arm.

As I mentioned in my launch controller page, I am planning to build a club-style launch stand. I'm going with a standard sawhorse design, using ready-made metal brackets to attach the legs to the top board. I'm hoping to be able to arrange matters so that the legs can be removed for storage.

In the meantime, I have begun building the tilt and swivel assemblies for the launch stand. I have completed one, and cut the materials for the other three; the picture at the right shows the assembled unit.

I used MDF (Medium Density Fiberboard) for the structural parts; the disk at the base was cut using a 2 1/4" hole saw, which conveniently left a 1/4" hole in the center which the 1/4" carriage bolt fits perfectly. The tilt assembly parts are 2" long and about 1 1/2" wide (a bit narrower, actually, as I set my table saw a bit close). I hand-cut the bevelled corners using a miter box, then drilled 1/4" holes for the shorter carriage bolt.

The piece attached to the disk is held by a deck screw plus yellow glue. To attach the rod to the upper tilt piece, I've drilled a 1/4" hole into it, then sunk a wider but shallower hole into which I glued a tap. I have drilled holes lengthwise through a set of 1/4" screws, which I will glue to one end of each rod; this will allow me to screw the rod into the tilt assembly, then unscrew it later when I tear the stand down. I use ceramic tile blast deflectors on my old stands, which have 1/4" holes in the center of them; I'll attach the deflector to the tilt assembly using the rod screw.

Gah. I hope the picture explains this all better than I just did...

Setting aside my in-progress controller for a moment, I have begun musing on a club-style launch stand and controller. For the stand, I can use a standard set of sawhorse brackets to build the base, and then put together four tilt-and-swivel rod mounts to go on top. I'm still considering how to proceed with this.

With regards to the controller, this is what I'm thinking. I'd like a relay-type controller, with a large 12V battery (car battery or similar) providing the fire at the launch stand end. The control panel would be powered by 4 AA batteries. I envision four toggle switches to arm the four sets of clips, and a single ignition button. This means that anywhere from one to four pads could be enabled and ignited more or less simultaneously. 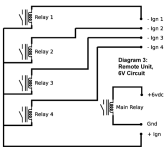 Not being an electronics expert (I'm trained as a computer programmer), I'm not sure that this is a complete system; in particular, I suspect that resistors may be needed to limit current to the relays. Of course, I haven't really described the relays in any way other than to show where they go... more research is obviously needed.