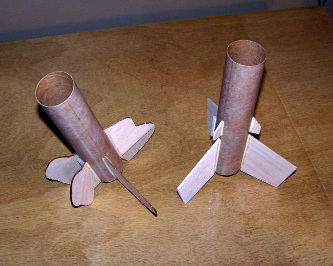 I got the fins on my Gooniebird Zero and modified Ruskie today. I had to make my own fin alignment wraps for both. The GB0 was pretty easy since it's just three evenly spaced fins, but the Ruskie's fins are laid out unusually.

I ended up printing the page from the PDF of the Ruskie manual which has the guide on it scaled to about 97% to fit the smaller body tube. Rather than mark all five fins plus the launch lug using the Centuri-style end-marking guide, which I dislike, I made an Estes-style wrap for four evenly-spaced positions (matching the wings, the rudder/cockpit, and the launch lug), then used the scaled-down guide to mark just the two wheel-fin positions.

Anyway, it all worked quite well, and here you can see the results.

Back in 2009 I built a rear ejection rocket, the Mo' Skeeter. It's a great model, turning in one pretty flight after another, and is one of the rockets I almost always launch (when I'm on a large enough field). So when I set out to build a couple of Goonies, naturally I decided to mimic that design. 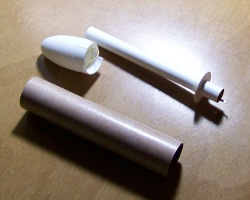 I'm building two such rockets. One is an Excelsior Rocketry Goonybird Zero, using the standard planset and decals from their website (along with the obligatory Estes Baby Bertha as a parts donor, and a handful of extra parts sourced from Semroc). The other is a variation on the Semroc Ruskie, using the stock Ruskie fins and decals with a Baby Bertha kit for parts. My plan with these projects is to improve on the design of the Mo' Skeeter. 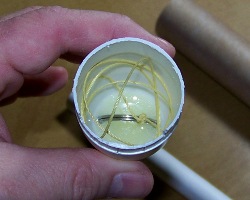 Here's how I'm doing it for these new rockets. I've epoxied an ordinary split ring, the sort you put your keys on, into the nose cone. The small amount of added nose weight won't hurt anything, and it should be much easier to thread a new piece of Kevlar into the large ring. Well, at least, possible...