I had five boys today, building School Rockets and Baby Berthas. They ranged from 8 to 10 years of age, with minimal building experience.

Putting the engine mount together went nicely. One boy had a fin crack; it was obviously a fault in the balsa, and I gave him one from my kit.

Later in the afternoon, after the glue set, we put the engine mounts in and attached the fins. There was the rub... the fin tabs fit too tightly in the slot once you apply glue. We got everything worked out, but it was more challenging than you'd expect.

For comparison, double-gluing the Baby Bertha fins went really smoothly. Some of the boys had a hard time figuring out how much glue to use... two wanted to use too much, and another hardly wanted to put it on. But overall, just gluing the fins to the outside of a tube went a lot easier than putting glued tabs through the tight slots.

A few years back I had two kids that age who built Semroc RTB kits, and the slots must not have been as tight because they went together nicely.

Okay, so in response to a post I made a while back about rocket kits for beginners, I was pointed toward the BMS School Rocket. I ordered enough for all the kids, plus one for me, and I'm building it today. I'll probably just get the engine mount together and dry fit everything, so I can pull it apart tomorrow and show the kids how it goes together. 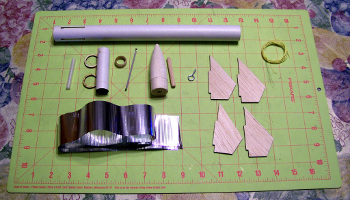 I have to say, this is an ingenious kit. TTW fins with preslotted sustainer makes the build easy to get right, and the parts are top notch. The dowel that fits into the nose cone to hold the screw eye is a nice touch also.

I vowed to follow the directions this time, and so far I mostly have. Of course, all I've gotten done is to assemble the engine mount. The assembly is a bit of a handful, actually, as the centering rings don't get glued until after the engine hook, shock cord, and thrust ring are all in place, which means the rings and engine hook are moving around while you put those other bits on (the instructions call for dry-fitting the rings and hook, and I don't see any other way to do it).

Step 4 in the instructions could use a rewrite... it waits until the last line to tell you to put the shock cord through the engine block (they say "engine stop block" which I've never heard before) when gluing it in place. I'd start the paragraph with a sentence about threading the shock cord through it. But it's a minor quibble.

I did deviate a bit. The instructions call for tying the screw eye to the shock cord at this stage (step 8, just after gluing the centering rings into place). With just the screw eye to tie to, without the nose cone being involved, I decided to try tying a Palomar knot. I like knots where the loose end is parallel to the cord when the knot is tied, and the Palomar is the only one I know how to tie. Well, it's easier to tie it in monofilament fishing line than in Kevlar. I got it done, though.